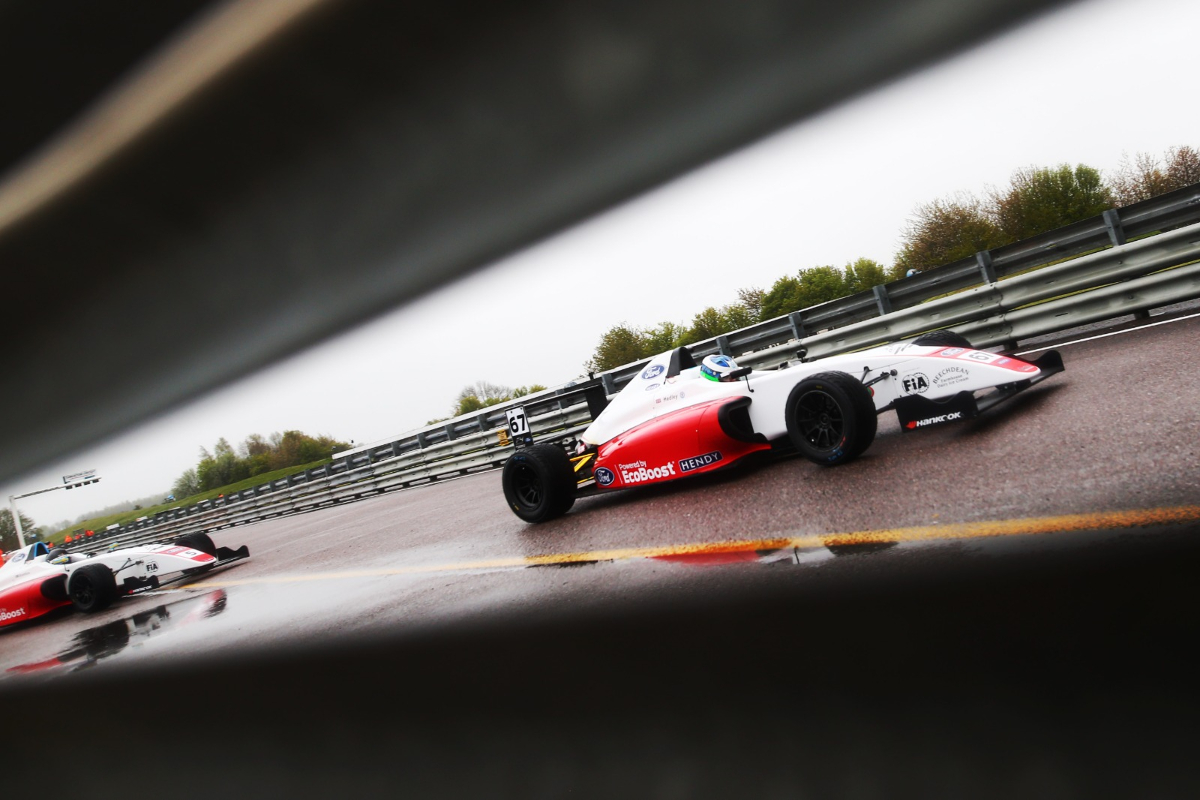 James Hedley won the opening British Formula 4 race of the season with his fourth consecutive victory at Thruxton.

The field was split between wet and slick tyres as they headed to the grid for the race. JHR Developments locked out the front two rows of the grid and opted for wet tyres, as had the likes of Carlin’s Dougie Bolger and Fortec Motorsports’ Oliver Gray. Meanwhile Argenti Motorsport’s Matias Zagazeta, Fortec’s Hedley and Joel Granfors gambled with slicks.

Matthew Rees started from pole, but it was Abbi Pulling in the lead of the race as they finished the first sector. Wet tyres had the advantage on the opening lap but as a dry racing line appeared the slick tyres came up to speed.

Hedley was flying as he climbed from the back end of the top 10 to challenge Roman Bilinski in second in the space of just a lap. He made quick work of his fellow second-year driver and closed the gap to Pulling.

Hedley and Pulling, who were team-mates last season, were neck-and-neck as they crossed the start/finish line, but Pulling couldn’t compete with Hedley, who was lapping seconds quicker than those on grooved tyres.

Granfors and Zagazeta had a similar charge up through the order and were soon running second and third behind Hedley.

Neither driver could stay close though, and they battled between themselves for the runner-up position. Second place changed hands multiple times, and Hedley extended his gap at the front of the field to over 10 seconds.

In the closing stages of the race, Granfors managed to shake Zagazeta and began closing in on Hedley. He and Zagazeta were both quicker than the race leader in the final laps, but were still some way off the winner.

Hedley took the chequered flag 1.452s ahead of Granfors, with Zagazeta a further 1.366s behind.

Argenti’s Eduardo Coseteng came from the back of the field to be the top rookie in fourth, having also gambled on slick tyres, and Arden’s Zak Taylor came fifth.

Gray led the battle of drivers on wet tyres over a minute back in sixth, ahead of Carlin’s Bikinski and Bolger.

The JHR quartet struggled with pace throughout much of the race. McKenzy Cresswell was the best placed of the four, finishing a lapped ninth. Pulling and Ree came home in 12th and 13th.