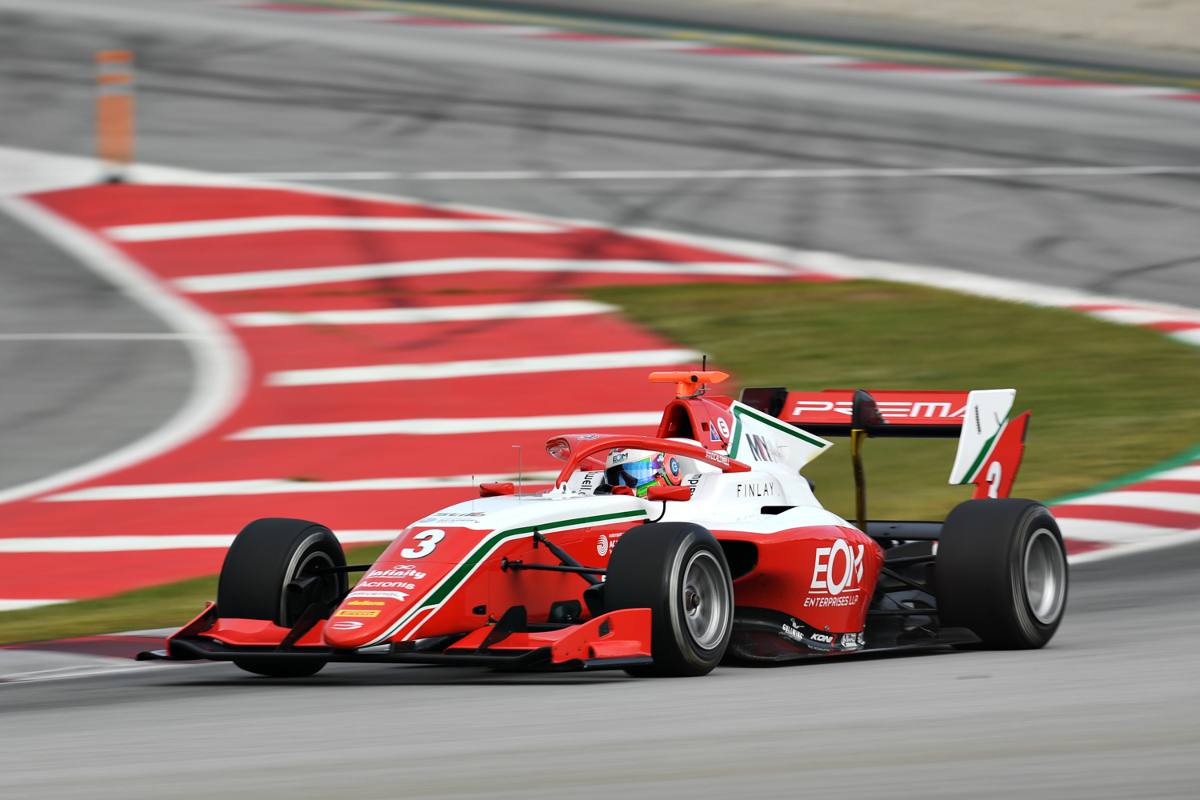 Prema’s Olli Caldwell benefitted from two separate collisions ahead of him to take victory in a dramatic second FIA Formula 3 race of the season at Barcelona.

After starting seventh on the grid, Caldwell was up to fifth place when Enzo Fittipaldi and David Schumacher came together at Turn 2 on lap 15 of 22.

Fittipaldi led from reversed-grid pole position at the start but remained within range of Schumacher’s Drag Reduction System, and was passed into Turn 1 on lap 12.

Trident driver Schumacher couldn’t pull away and was forced to defend two laps later, before Charouz racer Fittipaldi then got fully alongside after one further tour. Trying to go around the outside of Turn 1, Fittipaldi went wide off track and then tried to rejoin over the raised kerb at Turn 2, banging wheels with Schumacher and sending him crashing into the barriers.

Fittipaldi continued in third behind Matteo Nannini and Dennis Hauger, only to then slow to a halt under the subsequent safety car period.

When the race restarted with five laps to go, Hauger immediately went side-by-side with Nannini for the lead, but the HWA driver braked late on the inside to stay out front.

Going onto the penultimate lap they were then side-by-side once more, Hauger this time taking to the inside. After mounting the apex kerb he had an oversteer which led to him hitting Nannini, and was left with nowhere to go but run into his spinning rival.

Victor Martins had been ahead of both Hauger and Caldwell in the first part of the race until he got a massive slide in Turn 9 that ultimately cost him position to both Prema drivers, but he still had a chance at depriving Caldwell of his maiden FIA F3 win on the final lap.

Caldwell defended the inside into Turn 1 and left Martins no room to go around the outside, with the Alpine-backed MP Motorsport driver taking to the run-off area instead. He rejoined in second place but did not follow the prescribed lane to do so – something that could earn him attention from the stewards.

Frederik Vesti had a relatively quiet run to finish third ahead of Clement Novalak and Caio Collet.

Arthur Leclerc made up 16 places to finish 12th behind Calan Williams.

Race one winner Alex Smolyar was eliminated in a collision with Logan Sargeant at the start that brought out the safety car, caused after he sustained a puncture in Turn 1 contact with Novalak.