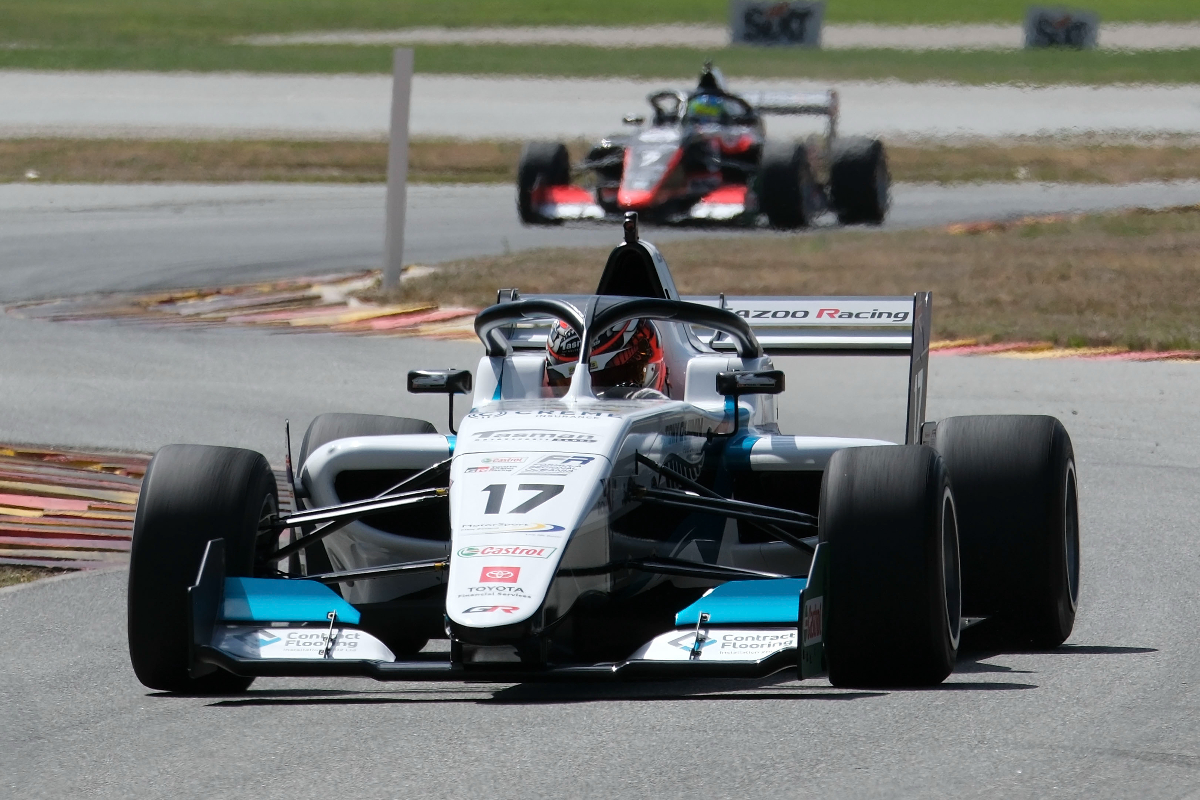 Callum Hedge continued his impressive weekend in the opening Formula Regional Oceania round at Highlands Motorsport Park by topping the second qualifying session by 0.613 seconds.

The M2 Competition driver had already topped free practice two on Friday then took pole in Q1 and won race one on Saturday.

“Absolutely stoked,” he said after taking his second pole. “[M2] gave me an awesome car this morning. We went back to the drawing board overnight. It’s a little bit cooler than yetserday, knew there was going to be a little bit more grip and a little bit more laptime to find.”

His team-mate Liam Sceats was first to set flying laps in Q2, and topped the times by a big margin once the first representative laptimes had come in.

But the track conditions meant the pace dropped quickly, and Giles Motorsport’s Ryan Shehan was the first driver to lap sub-1m32s.

Sceats then set a 1m29.600s to comfortably reclaim top spot, until Kiwi Motorsport’s Jacob Abel – who set out on track later than most of the field – bettered him by 0.021 seconds.

The response from Sceats was a 1m28.739s, which put him on provisional pole going into the final five minutes of qualifying.

He improved again to 1m28.607s, but team-mate Charlie Wurz followed him across the line and was 0.069s faster and then other team-mate David Morales completed his lap and slotted into third place just 0.085s off pole.

Out of the loop with the other pole contenders was Hedge, who went out late enough to have one less lap in the session than his opposition. He jumped up to first place by 0.221s with a 1m28.317s lap, and it looked like pole could be his when Sceats failed to improve on his next lap.

Wurz did get faster, bettering Sceats and getting within 0.038s of Hedge, but the gap between the top two grew when Hedge set a 1m27.818s and moved 0.537s clear.

The pace stagnated until the final lap for many drivers, but the battle for pole looked settled but the fight for third was hotly contested. Abel briefly took the position, then Sceats, then after the chequered flag was out Morales went second fastest.

Hedge’s final lap was another improvement, much to his delight. Morales was thrilled with second place too.

“It felt fantastic,” he said. “It felt really really good to finally get that lap in. I knew I had the pace.”

Although he revealed he was “stressed out in the middle of the session, I couldn’t see my gears on my dash at all”.

Wurz, in third, said: “It’s not where we really want to be.”