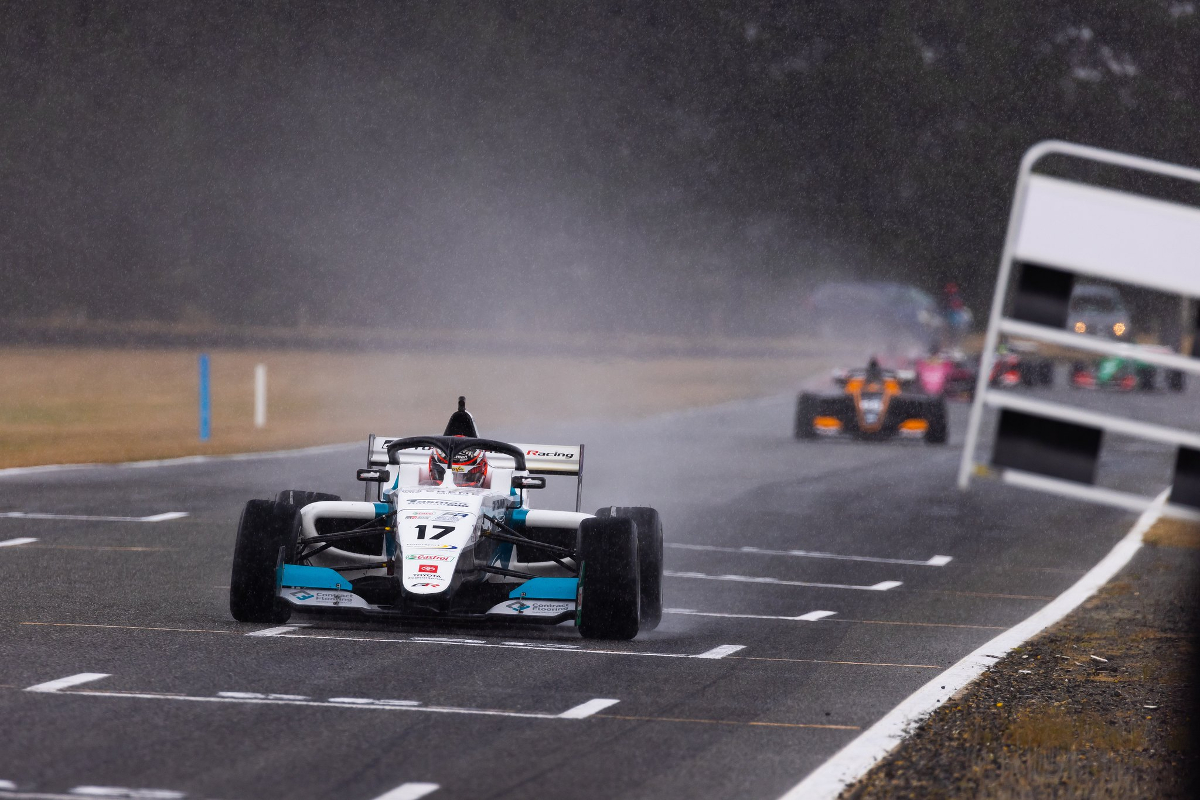 Callum Hedge brilliantly won the reversed-grid Formula Regional Oceania race at Teretonga, coming through from seventh on the grid to win.

A track that was wet in places meant everyone started the race on grooved tyres, with Ryan Shehan and Ryder Quinn occupying the front row positions.

Quinn was faster off the line and took the lead through turn one, with James Penrose rising up to third ahead of Liam Sceats and Jacob Abel. At the end of the lap, Tom McLennan copped a drive-through penalty for a last-corner collision with David Morales.

As Quinn built a lead, there was little progress from the title contenders Hedge and Charlie Wurz. On lap four, Hedge passed his rival around the outside of turn one for seventh place and then two laps later went off at turn one but held on to the place.

Hedge was soon hounding Abel for sixth, and Shehan was pressuring Quinn as the leader struggled slightly with overheating tyres. Shehan twice tried a move at turn one and could not draw ahead, but managed to take first place by daring to go around the outside of the last corner.

As the race approached halfway distance, rain started to fall in abundance and suddenly Hedge was flying up the order.

Between the final corner of one lap and turn one of the next he cleared Abel, Penrose, Sceats and then Quinn to jump up to second, and then on the next lap he dived down the inside of Shehan to take the lead. From there he built up a lead of seven seconds, before Shehan draw back in slightly in the final laps and finihed 5.599s behind.

Wurz took until lap 15 of 25 to pass Penrose for sixth, and then in a period where the rain stopped a few laps later he also moved ahead of Abel. The rain quickly returned, and Wurz passed Sceats for fourth on lap 20. He finished the race just behind Quinn, and with his championship lead over Hedge reduced to 21 points.