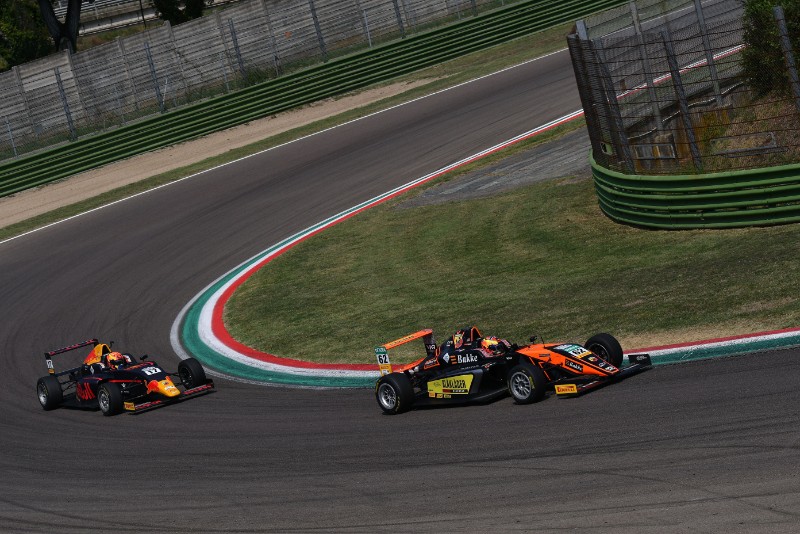 Dennis Hauger moved into the Italian Formula 4 lead with victory in the opening race at Imola, after title rival Guanluca Petecof retired.

For the first 25 minutes of the race, Stanek did not put a wheel wrong and maintained a small gap to Hauger. But at the start of lap 14, Stanek ran wide, allowing both Red Bull juniors through.

Stanek tried to continue, but had suffered suspension damage and retired.

Edger and Mikhael Belov stayed close behind Hauger, but could not find a way through, meaning Hauger took his fifth win of the season.

Meanwhile, title rival Petecof faced a difficult race after starting sixth. He battled with team-mate Paul Aron early on, and at one point ran three-wide with Ido Cohen at Tamburello, with Aron managing to maintain position.

Petecof was straight back on the attack and the pair made slight contact. The championship leader then ran wide, picking up a puncture, and was forced to pit.

Aron was able to continue without any significant damage, and spent the remainder of the race closing in on the lead battle.?Cohen and William Alatalo finished fourth and fifth behind him.

Ivan Berets and Francesco Simonazzi finished seventh and eighth – Simonazzi?s best result of the season – ahead of Andrea Rosso.

Rosso found himself under investigation after contact with Alessandro Famularo in the first half of the race. The pair were battling for position when they made contact and Famularo was sent nose first into the pit wall at the start of the pit straight.

He retired, and while Rosso continued, his team boss was called to the stewards office. Sebastian Estner was last of the points scorers.