Haryanto switches to Addax for second term in GP2

written by Peter Allen 18 December 2012
Rio Haryanto will race for the Barwa Addax Team in the GP2 Series next year, the Spanish outfit has announced.The Indonesian, who turns 20 next month, drove for Carlin in his rookie GP2 season in 2012 after graduating from GP3. The highlight of his season was claiming pole position at Spa-Francorchamps, finishing the year 14th in the standings.

He drove for Carlin as well as DAMS and Lotus in post-season testing, but has since signed with Spanish squad Addax for 2013. 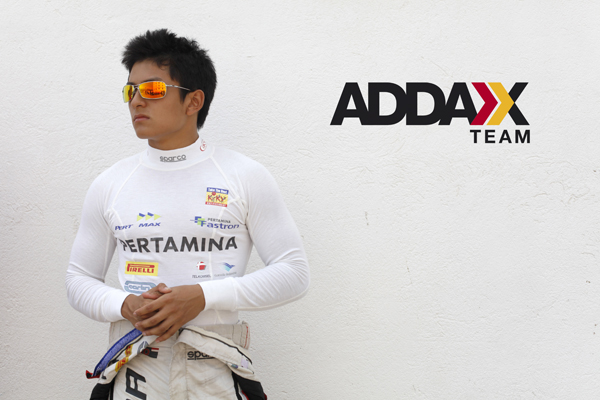 ?I am pleased to be joining the Addax Team for 2013,? said Haryanto. ?They are a team that have a very good history in GP2 with many of their drivers progressing into Formula 1. This will be my second year in GP2 so with all the experience gained in 2012 I am confident that 2013 will be a successful year. I would like to thank my sponsors Pertamina, Garuda Indonesia, Telcomsel? and Kiky for their continued support.?Former teams? champions Addax endured a tough 2012 season, finishing eighth in the final standings, but team chief Alejandro Agag hopes that Haryanto can return his team to the front on a consistent basis.

?We have to admit that 2012 wasn?t the greatest of seasons for us even though we were always looking to win races, like we did at three very important circuits such as Monaco, Spa and Hockenheim,? said Agag.

?We have put our unconditional faith for 2013 in Rio Haryanto to get back to the level we have demonstrated in the past. Rio has both the motivation and experience necessary and what?s more the desire to improve and triumph, which fits in perfectly with our philosophy. I would like to welcome him to the team and at the same time assure him that the team will do whatever is necessary to fulfil the goals we have set for this coming season.?

Haryanto coped well in his first season in GP2, looking particularly competitive during the early Asian rounds. There was promise in Europe too, finishing fifth in the first race in Valencia and pushing James Calado to win the second until he made a rookie error and collided with the Englishman.

His best days in GP3 came in tough weather conditions and Haryanto showed more of the same when he took pole position at Spa. Unfortunately for him he made another mistake in the race, spinning on new tyres behind the safety car and ruining his chances.

Having tested for Marussia on two occasions, it’s now not clear that that relationship will continue but Haryanto continues to enjoy good support from home and in Addax he’s got another team where he can prove his worth. He’s not in the same league as fellow second-years Calado and Felipe Nasr though, so he’s unlikely to deliver quite the performances that Agag might be looking for to return his team to the top of the series.

NEC to make first visit to British soil in 2013