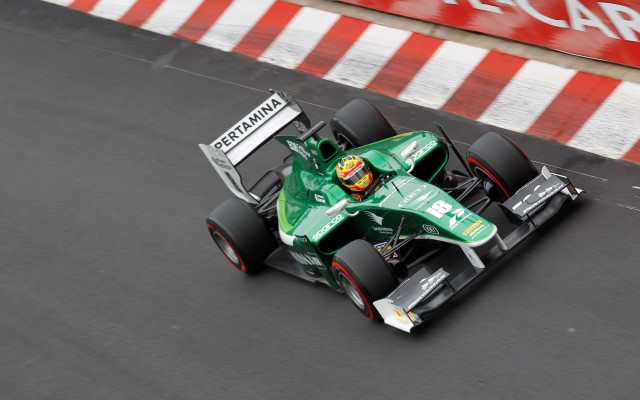 Rio Haryanto has lost his front row starting position for the GP2 feature race in Monaco after being one of four drivers to be handed grid penalties for impeding others in qualifying.

Caterham driver Haryanto had topped the Group B session to land a place at the head of the grid alongside pole-sitter Jolyon Palmer, but it was found that he had held up Stephane Richelmi (who the Indonesian had beaten to top spot by just 0.011 seconds) at the Anthony Nogues corner.

The decision relegates Haryanto to fifth on the grid, promoting Mitch Evans up to a P2 start for the second consecutive year, as well as Richelmi and Johnny Cecotto.

Daniel Abt got in the way of Cecotto at the Nouvelle Chicane, meaning he will start tenth instead of seventh, dropping him behind Stefano Coletti, Raffaele Marciello and Julian Leal. Abt had later slowed down on track at the chequered flag, preventing himself and Andre Negrao from starting another flying lap, but no penalty has been awarded for this second incident.

Abt’s Hilmer team-mate Facu Regalia has also been penalised for impeding Sergio Canamasas on the exit of the Swimming Pool, moving him from 20th to 23rd.

Finally, Felipe Nasr‘s first day back in the car after his maiden win in Barcelona gets worse. The Brazilian crashed out in practice and could then only manage the eighth best time in Group A, and has now been put back from 15th to 18th for impeding Cecotto at the final corner.

Meanwhile, last-place qualifier Artem Markelov will be forced to start from the pitlane in order to serve a grid penalty handed to him for causing a collision in the Barcelona sprint race.