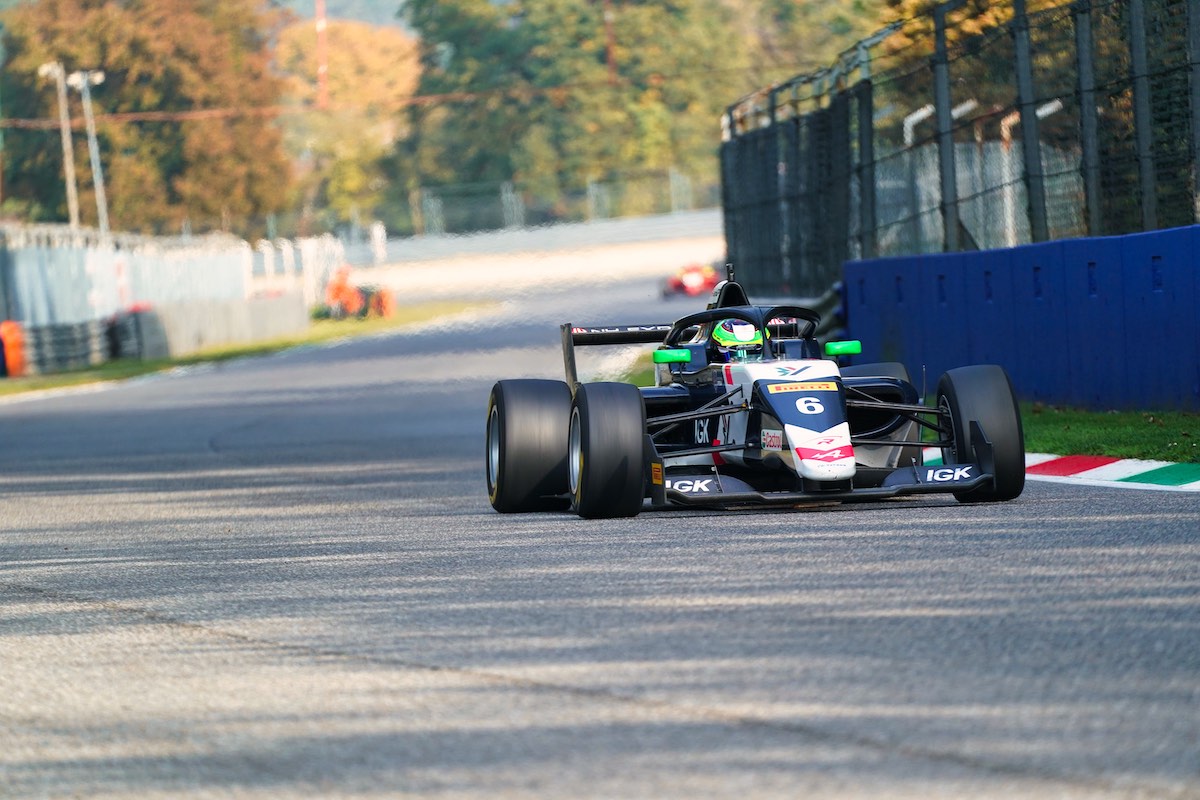 Isack Hadjar won an incident-packed final race of the Formula Regional European Championship by Alpine season at Monza after a collision between Prema team-mates Dino Beganovic and David Vidales.

Beganovic had dominated the race up to that point, leading from pole position, and never being headed despite two safety car periods.

At the restart after a lengthy red flag stoppage caused by an incident at the second chicane involving Patrik Pasma, Beganovic appeared to have again got the jump on second place Vidales.

However, the Spaniard managed to get a good run at the Swedish driver through the Curva Grande and was alongside as they approached the Roggia chicane.

Both left their braking late as Vidales tried to go around the outside, with the result that both cut the corner. As Vidales rejoined the circuit he hit the raised kerb, launching his Tatuus spectacularly into the air. As an out-of-control Vidales landed, his momentum took him across the track into the side of Beganovic who was pitched across the track and into the barriers on the onside.

Both cars were eliminated, although fortunately most of the field managed to find a way through the scene without further incident, although Nicola Marinangeli ran onto the grass and into the barriers.

With no further racing laps, Hadjar took the flag behind the safety car, followed home by Paul Aron in Prema’s surviving car, Hadrien David for R-ace GP and Kas Haverkort for MP Motorsport with his best result of the weekend.

The race had started after a lap behind the safety car with Beganovic asserting his position at the head of the field and Vidales holding onto second place despite taking to the run-off at the Roggia chicane on the first lap.

Champion Gregoire Saucy had a wild start to the race, joining Vidales in the Roggia run-off and then running over the kerbs at Ascari to drop to 15th position, although he ultimately recovered to tenth at the flag.

Aron had moved up to third but came under intense pressure from R-ace GP’s rookie champion Hadjar.

With Beganovic having built a comfortable cushion of around 2s, his lead was nullified by the first safety car called as Cohen spun at Roggia. Beganovic nailed a perfect restart to pull away, but behind him Vidales and Aron touched wheels under braking for the first chicane, with Aron taking to the escape road and rejoining in fifth.

Gabriele Mini took fifth for ART GP, ahead of MP Motorsport’s Franco Colapinto, who had made excellent progress from his 14th slot on the grid, and the third R-ace GP car of Zane Maloney.