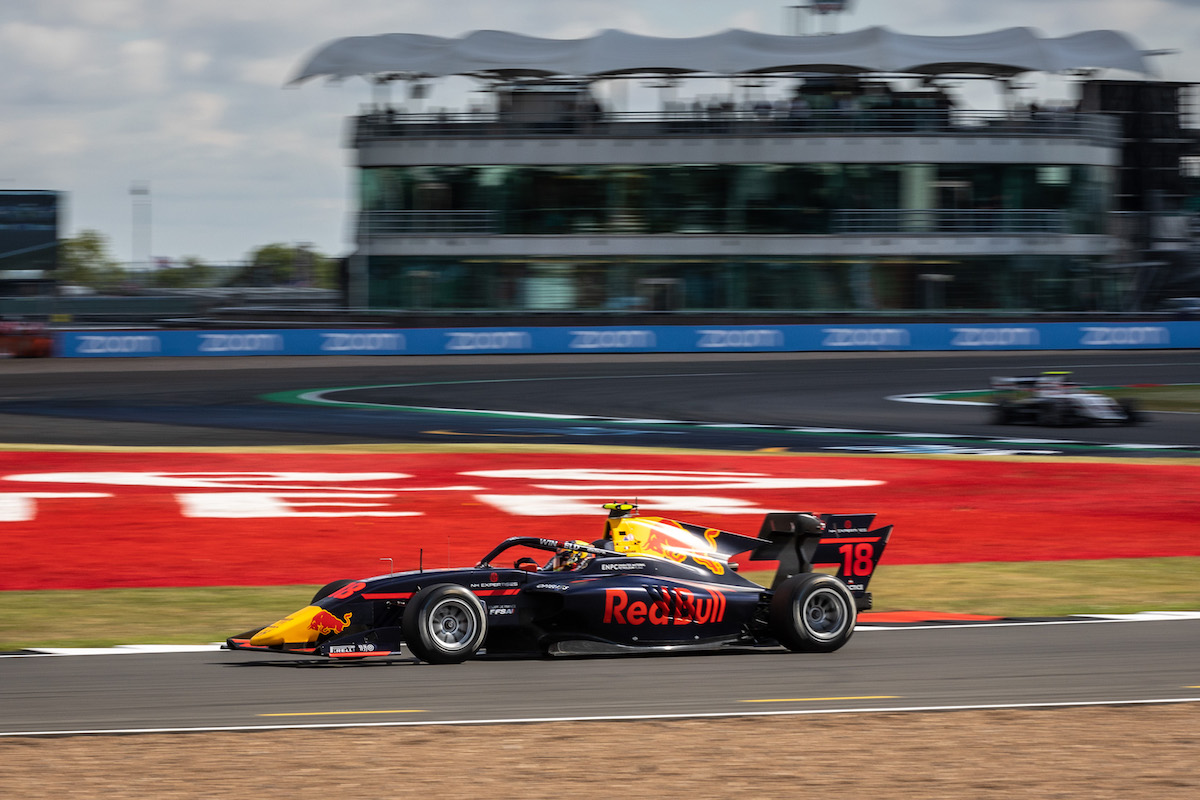 Isack Hadjar came from fourth on the grid to beat FIA Formula 3 Championship leader Victor Martins to win the sprint race at Silverstone.

After a disappointing qualifying, Martins started from second on the reversed grid and claimed the lead ahead of pole-sitter Reece Ushijima into the first corner at Abbey.

The ART Grand Prix driver would not be able to pull away however, and once Ushijima fended off Kush Maini into Brooklands on the first lap he could latch back onto the tail of Martins down the Hangar Straight.

Van Amersfoort Racing’s Ushijima later had the chance to benefit from the Drag Reduction System down the same straight, and on lap five attempted to go around the outside of Martins in Stowe but found himself forced wide.

Meanwhile, Hadjar had breezed past Maini with the DRS and on lap eight he passed Ushijima around the outside of Stowe.

A lap later the safety car was deployed, eradicating the small advantage Martins had been able to build, and there were five laps to go when the race restarted.

With just over two laps to go, Martins had to defend from Hadjar into Stowe but on the penultimate lap there was nothing he could do as the Hitech GP driver swept around his outside to claim the lead.

Hadjar set the fastest lap of the race on the final tour as he clinched the second win of his rookie season by 0.7 seconds over Martins.

Ushijima stayed right with the top two after the restart as the British-based, Japanese-American driver scored his maiden podium.

Despite his great pace on Friday, Maini struggled to keep pace with the leaders as he finished fourth for MP Motorsport.

Kaylen Frederick took his best series result to-date in fifth for Hitech after managing to keep a horde of championship frontrunners at bay.

Roman Stanek was sixth in front of Trident team-mate Zane Maloney, who made strong progress up from 10th in the early stages.

Rounding out the top 10 was the Prema trio of Arthur Leclerc, Ollie Bearman and Jak Crawford, who swapped positions on more than one occasion.

It was a quiet race for qualifying star Zak O’Sullivan who slipped back from 12th to 14th, finishing behind Caio Collet, David Vidales and Franco Colapinto.

The safety car was triggered by Charouz duo Zdenek Chovanec and Laszlo Toth tangling at Club at the back of the pack. The pair were already under investigation for being out of position on the grid, but their races ended early when Chovanec tagged Toth and was then hit twice more by his team-mate’s spinning car.

An extra formation lap had been required before the start while a slow-moving Brad Benavides nursed his slow-moving Carlin car all the way around the lap, with the team eventually able to get him into the race several laps down.