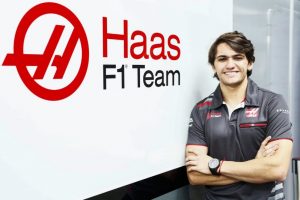 The 22-year-old American-born Brazilian started his career in lower tier NASCAR racing, before moving to Britain to race in Formula Renault BARC. He won the 2014 title, and picked up two more titles in the MRF Challenge and FV8 3.5.

Fittipaldi tested Formula 2 and LMP1 machinery last winter, before joining Dale Coyne Racing part-time in IndyCar. A World Endurance Championship programme alongside that interrupted his IndyCar season and a planned Formula 1 test debut with Haas at Barcelona after he broke both legs in a crash at Spa-Francorchamps.

?I?m extremely appreciative to have secured a role with Haas F1 Team as their test driver,? said Fittipaldi.

?I?d like to thank Gene Haas and Guenther Steiner for the opportunity to join the team. They?ve done an incredible job in F1, and to ask me to play a role in their continued success is naturally very exciting.”

His first taste of F1 machinery will now take place at Yas Marina for the Pirelli tyre test on November 27. The next day the car will be driven by Louis Deletraz, currently 11th in F2 and a former FV8 3.5 team-mate of Fittipaldi’s.

“I?m looking forward to getting behind the wheel of the Haas VF-18 in Abu Dhabi. I?ll carry that experience forward into 2019, and hopefully into a race seat in F1 in the future.?

Fittipaldi is the grandson of two-time F1 world champion and Indy 500 winner Emerson, and brother of Italian Formula 4 champion and Ferrari junior Enzo.

?He brings a championship-winning pedigree from his junior open-wheel career, and more recently he has acquitted himself well running in the IndyCar series. We?re happy to provide Pietro his first test in a F1 car off the back of those experiences. His subsequent role testing, and the feedback he?ll provide in support of our 2019 campaign, will no doubt further contribute to Haas F1 Team?s growth and development in F1.?