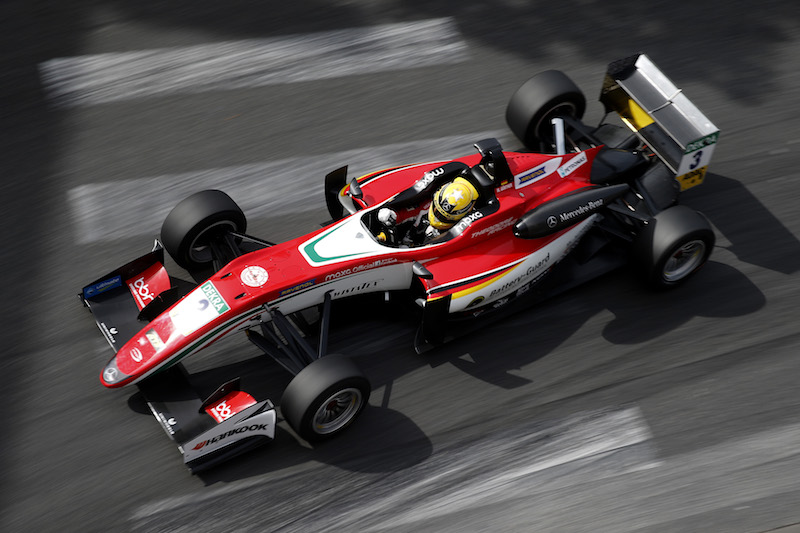 Maximilian Gunther has won the Pau Grand Prix after Lando Norris crashed out while seeming in control of the third Formula 3 European Championship race of the weekend.

After being beaten off the line by Gunther in race two in a reoccurrence of his start troubles this season, Norris appeared to make a good getaway this time and aggressively swerved to cover his fellow front-row starter anyway.

Norris then drove away out front, leading by 1.2 seconds after one lap and by around four seconds when the safety car was needed around 10 minutes after David Beckmann crashed at Foch.

Carlin driver Norris increased his lead above two seconds again after the restart, but with nine of the scheduled 33 minutes left on the clock he hit the outside barrier on the exit of Foch, with his car potentially already damaged earlier in the corner.

This gave Gunther a 1.7-second advantage over his Prema team-mate Callum Ilott, and was 1.9s ahead at the finish.

Once up into second, Ilott came under pressure from Ralf Aron, who put a difficult start to the season behind him with his first podium with Hitech from seventh on the grid.

The Estonian gained a spot past Joey Mawson on the first lap and then passed Joel Eriksson eight laps in, then gaining another position past Harrison Newey after the safety-car restart.

Newey had come close to disaster at Foch earlier in the race but was able to repeat his best-yet finish of fourth from race two in front of Eriksson.

Eriksson does regain the points lead, level on 139 points with Norris with Gunter only two further back and Ilott on 109.

Nikita Mazepin could have completed his best weekend in F3 to-date with a sixth-place finish had he not slowed and pitted with 10 minutes remaining.

Ferdinand Habsburg instead took sixth in front of Tadasuke Makino, Pedro Piquet and a muted Jake Dennis in what could be his final F3 race at the end of his three-round link-up with Carlin. Guan Yu Zhou completed the top 10.

Mawson and Jake Hughes were in the top 10 before a possible?issue behind the safety car, with both slowing and pitting at the restart.