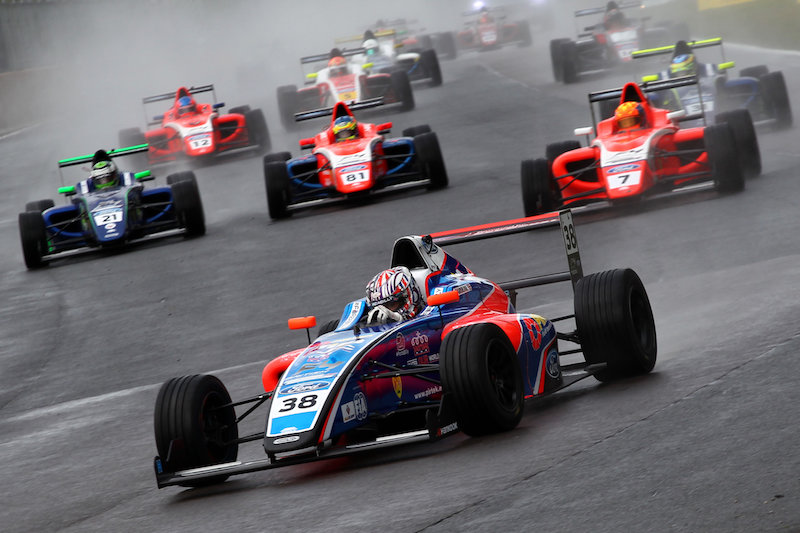 Jamie Caroline took his eighth victory of the British Formula 4 season in the first race of the weekend at?Oulton Park but ended it?with a spectacular trip into the barriers, as Oscar Piastri netted his maiden?win.

On Saturday, Caroline won?on a wet but drying circuit. A strong start from fourth by Arden?s Alex Quinn elevated him to second, and he pursued Caroline for the distance in an accomplished drive.

Linus Lundqvist also made a strong start that established his third place, ahead of Patrik Pasma and Logan Sargeant.

A close battle between Piastri and Harry Webb for sixth place fanned out towards the end of the race, although seventh for Webb meant his first Challenge Cup class victory.

Barrier damage from a Porsche Carrera Cup GB race meant the second race of the weekend was delayed to Sunday, with the third race set to be moved onto the bill at the Knockhill round.

Piastri started from pole for the reversed grid encounter, and was just holding off Sargeant when fourth-placed Caroline crashed at Old Hall?on the eighth lap.

Caroline had made a messy start, including contact with Quinn, that left him?in a distant sixth.

He was frequently the quickest man on track though, and a damaged front wing endplate for fourth-placed Lundqvist led to him quickly being involved in the battle for fourth.

Webb had been trying in vain to get past Lundqvist, and once Caroline had caught up he was only fifth for a matter of seconds. As he went for a move down the inside of Lundqvist at Druids, Caroline drove straight round the outside and into fifth.

A few seconds later the championship leader was level with Lundqvist and despite pitching him into a half spin, he made it through the last corner in fourth place.

Up front a few mistakes by Piastri had brought Sargeant right onto his gearbox, and after a few failed attempts the American dropped back slightly.

As the race was approaching what would?ve been half distance, Sargeant would?ve had several more laps to attack the leader.

This would?ve been the case had it not been for the rapid Caroline colliding with Carlin team-mate Pasma at the first corner?and then hurtling off track and rolling as he struck the barriers. He escaped unscathed.

With only seven laps run the race was red flagged and announced as complete, resulting in a first victory for Australian Piastri and a second class victory for Webb.