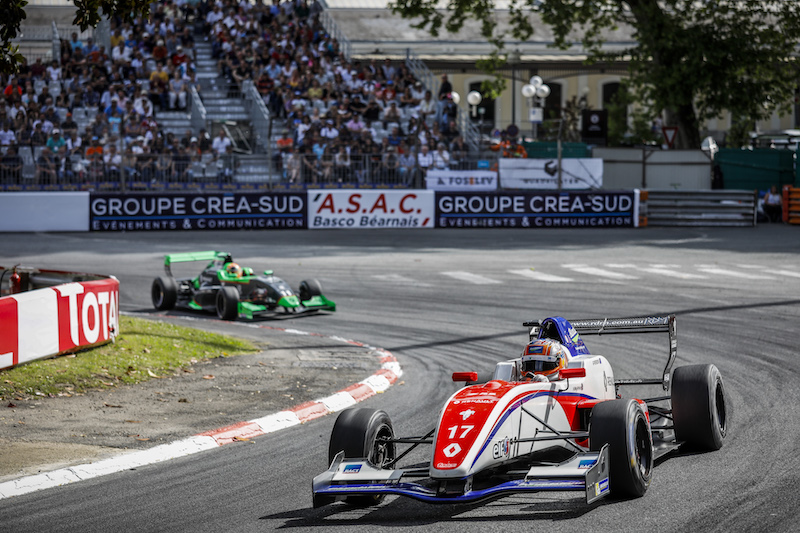 Alex Peroni saw off Sacha Fenestraz to take his first Formula Renault Eurocup win in race two on the streets of Pau.

After upstaging the series favourites to take pole position in qualifying, reigning Ve de Ve single-seater champion Peroni kept the lead ahead of fellow front-row starter Fenestraz off the line.

Fenestraz got a better exit from Gare however and got alongside Peroni on the hill up to Pont Oscar, the pair making contact as Fenestraz got up on the pavement.

With the inside line, Peroni kept hold of the lead into Pont Oscar, where there are yellow flags on the first lap of a race.

The Australian preceded to open up a 1.4-second advantage over his Franco-Argentine rival over the opening laps, but the gap suddenly came down underneath half-a-second with just over 10 of the 25 minutes remaining.

Peroni soon reinstated his 1.4s lead, but had Fenestraz right back on his tail again going onto the final lap – after there had been a yellow flag at Foch on the preceding tour after Dan Ticktum crashed out.

There was no way through though and Peroni took Fortec Motorsports’ first Eurocup win since Ben Barnicoat’s triumphs at the end of 2015.

Race one winner Robert Shwartzman completed the podium, holding off R-ace GP team-mate Will Palmer by six tenths of a second at the line and in the process taking the championship lead away from him by one point.

Verhagen benefitted when Henrique Chaves misjudged a move on Yifei Ye, lighting up his tyres exiting?Lycee and smacking the outside tyre barrier, before holding Ye up as he crawled to a halt.