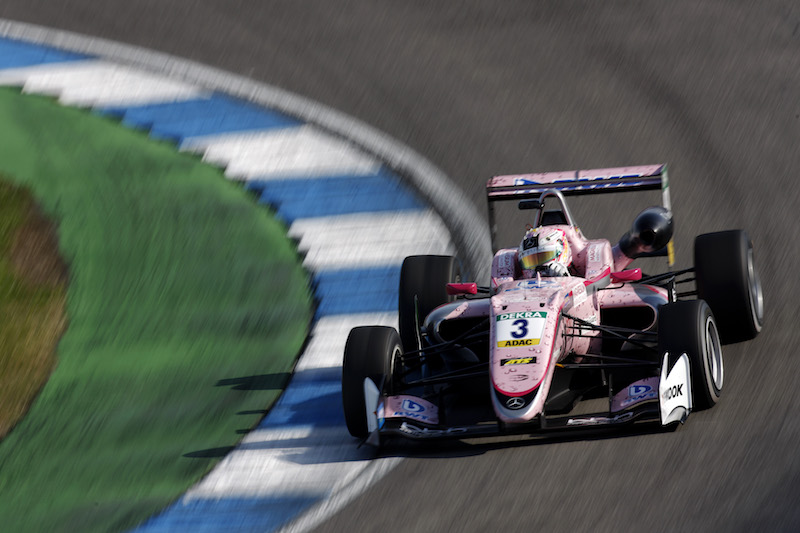 Maximilian Gunther won the final race of the Formula 3 European Championship season at Hockenheim but Joel Eriksson charged to second place to beat Gunter to the runner-up position in the standings.

Gunther went unchallenged from pole position as he took his fifth win of the year, and his first since the opening Norisring race on July 1.

Callum Ilott made a poor getaway from alongside Gunther on the front row, dropping the race two winner down to sixth and promoting Eriksson ? who needed a podium finish to hold onto second in the standings over Gunther ? up from fifth to fourth.

Eriksson then passed Jake Hughes into the hairpin on lap two, and took second place away from Guan Yu Zhou on lap three.

Gunther by now had an advantage of nearly three seconds out front, and this went up during a full course yellow period required after Ferdinand Habsburg tripped over Marino Sato and crashed out in the stadium section.

Prema driver Gunther?s final winning margin was 3.5 seconds over Eriksson, and the Motopark driver finished five points ahead in the standings.

From sixth on the grid, champion Lando Norris passed Hughes for fourth on the restart after the FCY and pressured Zhou for third but couldn?t deny the Chinese Ferrari protege.

Ilott passed Hughes for fifth at the hairpin with 12 minutes remaining.

Pedro Piquet took seventh ahead of Nikita Mazepin, who was ordered to give the place back after being judged to have passed Piquet under FCY.