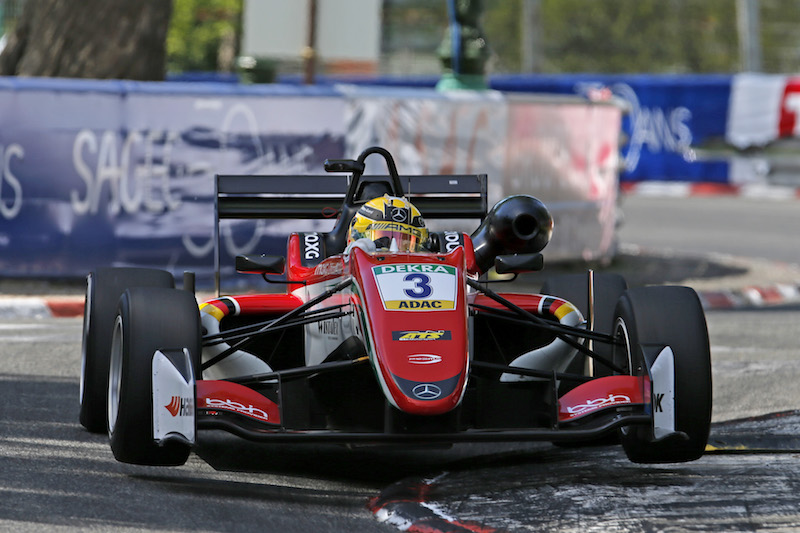 Maximilian Gunther beat Lando Norris off the line and resisted multiple attacks from the Briton to take his first win of the Formula 3 European Championship season in race two in Pau.

Norris has been plagued by poor starts so far in his rookie season and his getaway from pole was slow enough for Gunther to get alongside into the right-hand sweeper that follows and to take the lead.

The Carlin driver ended the lap right on Gunther?s tail however, forcing the German to defend the inside at Gare on lap two, then again at Pont Oscar where Norris tried to drive around the outside, getting perilously close to the barriers.

Prema man Gunther then ran deep and wide at the next corner, the Lycee hairpin, to allow Norris to get alongside again as they took the Musset curve.

The pair traded fastest laps over the next few laps before Gunther began to take charge, widening his gap to as much as three seconds before appearing to ease off at the end, with 1.9s separating them at the flag.

Second place was enough for Norris ? who will start this afternoon?s Pau Grand Prix from pole ? to take the championship lead after Joel Eriksson crashed out while running fourth.

The Swede had been pressuring third-placed Callum Ilott for much of the race ? with Ilott unable to keep pace with the front two ? but hit the barriers at Foch with five minutes remaining.

That gave a best-ever European F3 result of fourth to Harrison Newey, who got ahead of both Nikita Mazepin and Ralf Aron on the opening lap.

He finished with Aron and Jake Hughes in close attendance, with Mazepin seventh and Ferdinand Habsburg in eighth.

Jehan Daruvala passed Carlin team-mate and past Pau winner Jake Dennis for what became ninth at Lycee at around mid-distance, having also tried the move on the inside early in the race.

Eriksson?s exit made it a torrid race for his Motopark team, with team-mates Marino Sato and Keyvan Andres tangling at Lycee halfway through while fighting over last place.