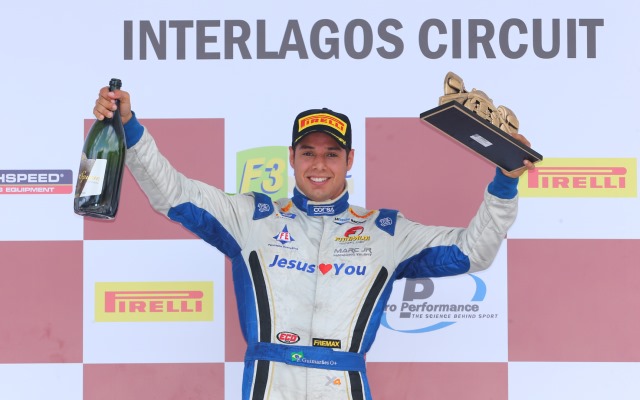 Brazilian Felipe Guimaraes is planning to race in either Formula Renault 3.5 or the FIA F3 European Championship this year.

Speaking to PaddockScout after retaining his F3 Brazil Open title at Interlagos on Sunday, he said he is in talks with teams in both categories but admitted he still needs to finalise sponsorship.

“I have plans to race in Formula Renault 3.5 or in FIA F3,” said the 22-year-old former GP3 racer, who returned to Europe last year after two seasons away and finished fourth in British F3 with Fortec.

“We are in talks [with teams in those series], looking for the best option. In a couple days, I will travel to UK to meet some teams and to decide what we will do.

“For now, I have a big question mark too about sponsorship. But I have faith and I hope everything will be fine and I will be in Europe this year again.”

Guimaraes was pleased with how his year got underway with victory in the F3 Brazil Open weekend.

“It was a good weekend, very smooth,” said the reigning South American champion. “We were very quick in every session and I set the pace in the whole event. It was pretty good.

“This year, I had Victor Franzoni as my teammate. He was a good reference for me. He is young, but he is very quick and it was very good to have him as my team-mate. He forced me to my limit this weekend. But I am happy overall. Once again, we started a year with good pace and a win. And I hope for more this season.”

He believes that getting race wins under his belt in January is a great benefit.

“It is really very important. No one is racing in Europe right now. It is very cold there. Some drivers may be testing, but I think it is very complicated due to weather conditions. So, to be racing here in Brazil, with such good results, certainly is a step forward.”

Speaking about the costs of getting to and racing in Formula 1, Guimaraes added: “I think Formula 1 is not having a good moment. Every young driver needs lot of money and some talented drivers have no chance to drive. So, money is very important right now.

“I believe I am talented, so I will keep fighting to find a good sponsor for me.”

Guimaraes was speaking to Felipe Giacomelli