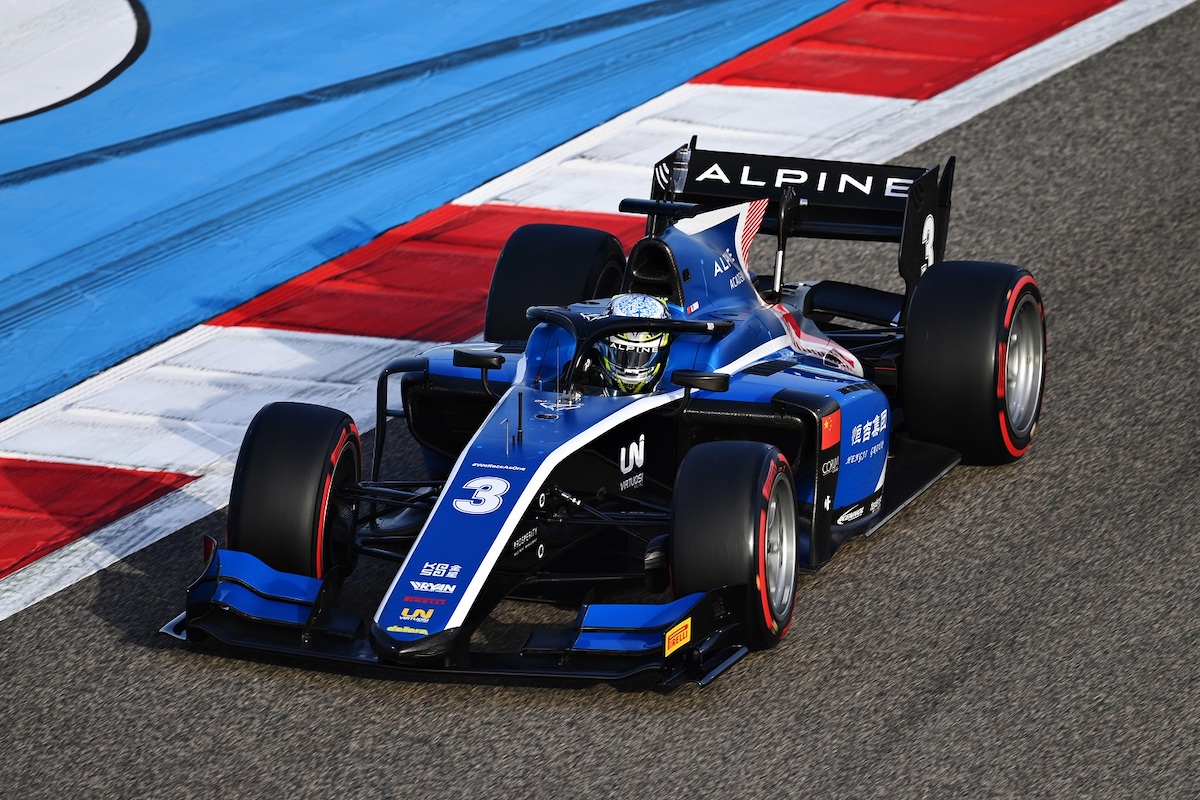 Guanyu Zhou earned his maiden Formula 2 feature race victory in a thrilling third and final race of the season-opening weekend in Bahrain after passing Richard Verschoor with five laps to go.

Alpine F1 tester Zhou, who lost a likely feature race win in the 2020 season-opener at the Red Bull Ring due to a mechanical issue, began the race from pole position on the hard tyres, but he was soon shuffled down to fourth place by three-soft tyre shod drivers.

Zhou’s Alpine stablemate Oscar Piastri became the leader of that trio as the race reached the pitstop phase. Piastri, ART Grand Prix’s Christian Lundgaard and Zhou’s Virtuosi team-mate Felipe Drugovich all made their pitstops, but the virtual safety car  (which soon became a full safety car) was called just as Piastri was leaving the pits, helping him to rejoin in front.

That safety car was required when Gianluca Petecof’s fire extinguisher went off on his Campos-run machine and his car came to a stop at Turn 1.

Marcus Armstrong, Verschoor and Matteo Nannini were able to then make their mandatory pitstop under the safety car, giving Armstrong the lead when the race restarted. Now on the hard tyres, the Ferrari junior immediately lost that lead on the restart, as Piastri headed Verschoor.

Verschoor, only on a one-round deal with MP Motorsport, was able to use his soft tyres to pass the hard-tyre shod Piastri and move into the race lead, while Zhou charged from sixth to second place within five laps.

Zhou then passed Verschoor on lap 28 of 32 to take a race lead that he would keep until the chequered flag. Verschoor struggled to manage his soft tyres and came under pressure from the cars behind.

The virtual safety car was required with laps to go when Dan Tickum and Piastri collided at Turn 2, with the latter sent into a spin and out of the race.

When the race resumed, Carlin’s Ticktum and current Red Bull Liam Lawson overhauled Verschoor to complete the podium positions behind the new championship leader Zhou, who just stayed out of Ticktum’s reach on the final lap. Ticktum’s clash with Piastri was investigated but no action was deemed necessary.

Verschoor was forced to settle for fourth place ahead of Armstrong, who scored his and DAMS’ first points of the season.

Ticktum’s team-mate Daruvala finished in sixth place ahead of Piastri’s Prema team-mate Robert Shwartzman, who recovered brilliantly from earning a drive-through penalty for rear-ending Roy Nissany on the opening lap to take seventh place and two bonus points for the fastest lap.

Theo Pourchaire took eighth place when time penalties for safety car infringements were awarded to Drugovich and Lundgaard. Drugovich’s penalty dropped him to ninth place ahead of Nannini who took his F2 point in 10th place.

David Beckmann was 11th ahead of Lundgaard and Hitech GP’s Juri Vips, who had another troubled race from the back of the grid.