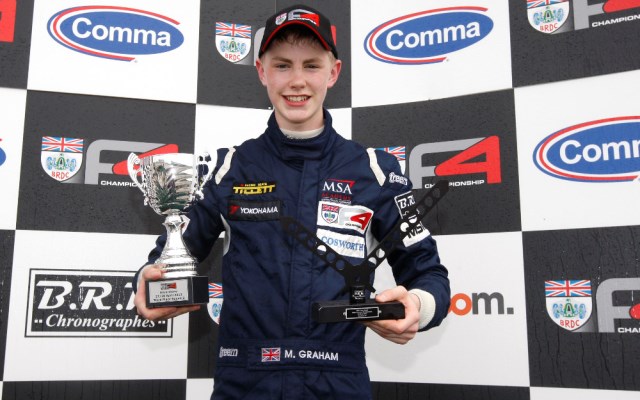 Karting graduate Graham finished fourth in the first season of the category this year, claiming race wins at Brands Hatch and Silverstone driving for the Sean Walkinshaw Racing squad.

He will now join up with Wayne Douglas’ outfit having worked with them in preparation for his move into single-seaters, and both driver and team are confident of contesting for the crown.

?It?s good to be back with Douglas Motorsport for the BRDC F4 Winter Championship,” said Graham.

“I made my transition into cars with them so it?s nice to be back to do some races and I?m really hoping we can challenge for the title.”

Douglas added: ?It?s great to see Matty back under the Douglas banner.

?Matty completed an extensive driver development programme with us ahead of his Formula 4 campaign and his two race wins are testament to the value of that time with ourselves. I?m very confident that we can hit the ground running at Snetterton and challenge for the Winter Championship title.?

Graham joins Pietro Fittipaldi, Fredrik Johansen and Will Palmer in having signed up for the Winter Championship, which takes place over rounds at Snetterton on 9-10 November and Brands Hatch on 23-24 November.

Trummer to continue with Rapax in 2014