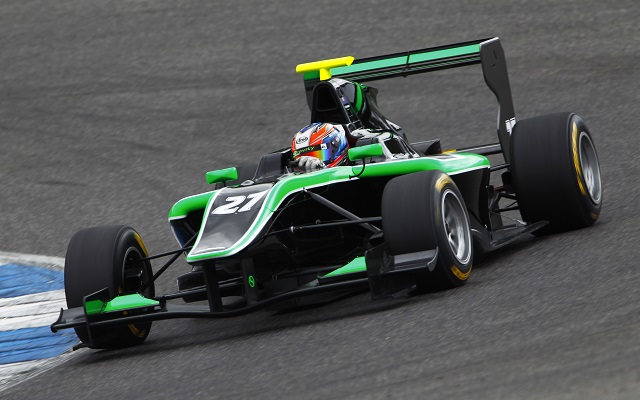 The GP3 series organizers have unveiled a list of 27 drivers that will take part in the opening day of test at Circuit de Jerez.

Headlining the list is the return of Richie Stanaway, who will do a second test with Status after running with the team at Estoril. Stanaway, who appears to be in contention for a seat with the Irish-Canadian team, has been absent from single-seater racing since a heavy crash cut his 2012 season in Formula Renault 3.5 short. A race winner on his one-off appearance in GP3 in 2011, he was 12th in the Porsche Supercup last year.

At Status, Stanaway will be joined by the previously confirmed Nick Yelloly, with Mexican racer Alfonso Celis, who graduated from Formula Renault NEC, filling the third seat.

German squad Hilmer Motorsport are set to only field two cars on their first testing appearance in GP3. The team has already signed Ivan Taranov for the 2014 season. For the test, the Russian will be joined by F3 Open race winner Nelson Mason, who ran with Italian squad Trident at Estoril.

Trident, meanwhile, will replace Mason with another F3 Open graduate – Denis Nagulin – who will fill the only unconfirmed spot in the team. Spanish racer Carmen Jorda will also slot into a team alongside two other confirmed driver, with the female driver getting another test with Koiranen.

Jenzer, who are yet to announce a single driver for the 2014 GP3 season, will test with Pal Varhaug, Adderly Fong and Christopher Hoher. Varhaug was the first race winner in GP3 history and has since raced in Auto GP and GP2. Fong contested last year with Status, while combining his GP3 duties with an Audi R8 Cup China campaign, where he took the title. Finally, Hoher is making his full-time debut in cars this year, having joined Team West-Tec in F3 Open.

The other teams will test with their previously confirmed lineups.