The GP3 Series has never failed to provide an exciting crop of young drivers – and this year looks no different.

Detractors will point to the grid of only 19 cars (reduced by the off-season exit of Koiranen), but just?like the Formula 3 European Championship against which it is seen to compete, there is plenty of talent among those 19 drivers.

Comparisons to European F3 are particularly pertinent this year, with talk of a merger on the cards. But while it’s F3 – as the FIA’s baby – that is?the formula that seems likely to be carried over into any merged format, GP3 is lacking?little if anything in the driver stakes this year.

Every Formula 1 team with the exception of Force India can boast a public affiliation to at least one driver on the grid (Toro Rosso through Red Bull and McLaren through Honda), and it’s two of these drivers that start as the two most likely champions on paper.

Aitken and Russell: Team-mates and compatriots?- and title rivals? 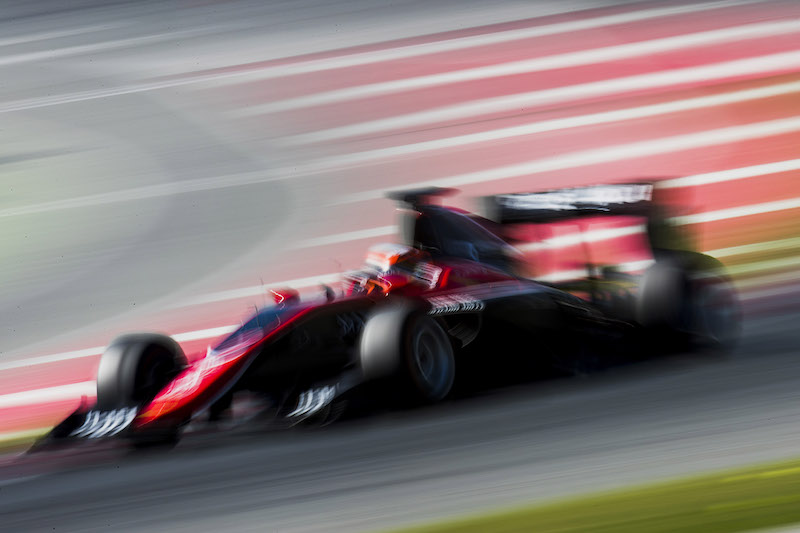 It’s far from guaranteed that the title battle will be exclusively fought between these two Brits at ART Grand Prix, but if it is, it should?be fascinating.

A year on from impressively snatching both the?Formula Renault Eurocup and Alps?titles, Jack Aitken was just about as good as anybody in GP3 at the end of the 2016 season. It was a fine achievement for a true rookie, up against drivers with proper F3 experience, and showed his Renault Sport Academy status was about more than just?a marketing ploy for Renault’s series.

His form was such that a move up to Formula 2 for this season would not have looked misguided, but the 21-year-old Londoner clearly sees an opportunity to put his name firmly in lights by claiming the title.

If he achieves it, it would be well-deserved. Balancing racing with?completing?his studies?- which sometimes included?missing crucial tests – meant Aitken flew under the radar a little in his first two Formula Renault campaigns, but his progress in the last 18 months or so has been impressive, and 2017 is a chance to confirm that to a wider audience.

A title would be hard-earned, too.?A year’s GP3 experience?has rarely proven?to be a huge advantage up against talented F3 graduates – only?Mitch Evans has used the former to win the title, while champions in the latter list include Valtteri Bottas, Alex Lynn, Esteban Ocon and Charles Leclerc. And inside?the ART awning, Aitken has a rival?with all the qualities to follow that trend.

George Russell arguably struggled to live up to his potential during his two seasons in F3, but maybe only now does he have the tools to turn occasional?spectacular performances – like wins on his Formula Renault Eurocup and European F3 debuts or pole on his first time in Macau last November – into more consistent brilliance.

That Mercedes?considered Russell worthy of signing to a development deal – to follow in the footsteps of Ocon – says a lot about what he may well be capable of. With the three-pointed star facilitating a deal with ART for GP3, Russell will have what he never had in F3: the best package underneath him.

When that’s combined with the support, expertise and relative security provided by the Mercedes deal, it stands to reason that Russell will be stronger than ever this season.

He may not have prior GP3 experience, but given what that man Ocon and his former F3 rookie rival Leclerc have achieved with ART in the past two years, that status will not offer?him anywhere?to hide.

The other half of the ART?super-team 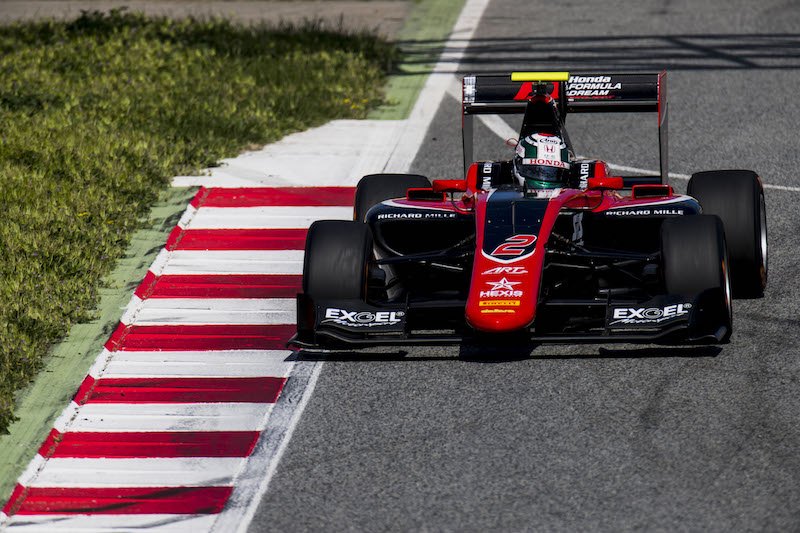 Last year, the ART quartet was strong enough to wrap up the teams’ title well in advance of the season’s climax. This year, and unlike then, you could make a strong argument that the French squad’s four are the four strongest?drivers on the grid, and Aitken and Russell will be well aware of the possible threat from their two other team-mates.

Honda protege Nirei Fukuzumi did a very respectable job last season after coming over from Japan, with consistent pace across tracks he was visiting for the first time.

With a year at those circuits and a year in an ART-fettled GP3 car under his belt, he’s got the potential to make a big step forward this season. There are few doubts over his speed, particularly after some strong pre-season showings, so it’ll be how he converts that into results that will determine whether he can truly challenge for the title.

Anthoine Hubert is certainly the dark horse in the team, as the only driver without an F1 team backing him, and a rookie without a?reputation as strong as?Russell. But he shouldn’t be underestimated.

Much like Russell, some new backing means he’s enjoyed a more stable winter and far?better preparation than he’d had in F3 one year ago.

A true championship challenge may be too much of an ask, but at ART the fast Frenchman will be very much?capable of leading the field on his day, just as he did at the Norisring last year. 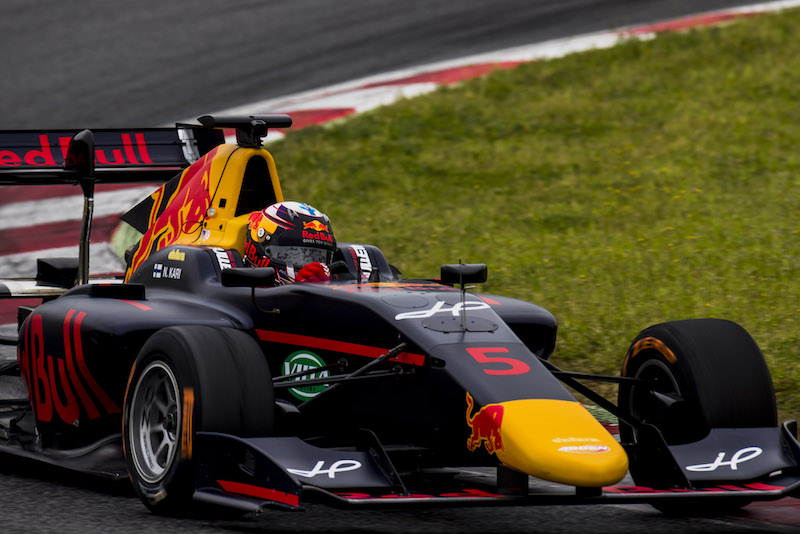 Given ART’s record in GP3 you can understand Aitken’s decision to make the switch?from Arden over the winter, but it’s worth remembering that he and then-team-mate Jake Dennis outscored the ART drivers with some comfort over the final rounds of last season.

The pair demonstrated superior race-pace from Arden, which was rooted in?keeping the Pirelli tyres performing at their best for longer. This was prevalent in 2015 too, when Emil Bernstorff outscored Ocon and Luca Ghiotto in the opening races of the weekend.

In theory there’s no reason Arden can’t carry this advantage into 2017, but it’s questionable whether any of its drivers are capable of beating the ART contenders to the title.

In terms of talent, Niko Kari is every bit a match for the ART drivers, showing ability in F3 last season that was enough to keep Red Bull backing for a second season this year. However, coming into just his third year in cars, and at still only 17 years old, the Finn is a lot less refined than Aitken and Russell.

Euroformula Open champion Leonardo Pulcini appears to be Arden’s second-best bet, and literally matched Aitken on the final day of pre-season testing. Steijn Schothorst completes the line-up, after a few?strong showings with Campos in 2016.

Alongside Kari, the?other driver most likely to upset?any ART domination will be Dorian Boccolacci. It took until last week for his?drive with Trident to be confirmed, but last year’s Formula Renault Eurocup runner-up had already topped both the Barcelona and Valencia pre-season tests. It remains to be seen how representative that pace was, but it was a timely reminder from a driver who was seen?as the next Esteban Ocon when he was on the books of the Gravity management scheme.

Kevin Jorg ought to also be strong at Trident, but he’s been a lot quieter than Boccolacci during pre-season. Ryan Tveter, on the other hand, has looked good after struggling to make a significant impression in F3, while Giuliano Alesi will look to kick on after making the big step up from French F4 last term.

Two more stand-out names are at Jenzer Motorsport, in Alessio Lorandi and Arjun Maini. Both have shown considerable ability on their day so far in their careers, but both have plenty to prove after disrupted 2016 seasons in which they both joined Jenzer in GP3 after giving up on difficult F3 efforts. The question?is whether?they’ll be able to make?Jenzer a truly competitive force. They’ll certainly hope to do better than?when they were team-mates to Leclerc in F3 two years ago.

Santino Ferrucci will be the driver to keep an eye on?at DAMS in his second season with the team, out to prove he’s a realistic candidate to be an American F1 racer for Haas. Similarly, Tatiana Calderon will need to justify her recent Sauber tie-up after being firmly shaded by Aitken and Dennis at Arden last year.

The third DAMS driver Bruno Baptista is one of the less illustrious drivers on the grid, but the Brazilian is no slouch either. The same can be said of his fellow Formula Renault graduate?Julien Falchero at Campos, but the Spanish squad’s hopes will more likely rest on the Frenchman’s two team-mates, who were only confirmed earlier this week.

For Marcos Siebert, the step up from Formula 4 is a large one, but it’s one that’s entirely deserved after he pipped Mick Schumacher to the Italian title. His speed has been good, as has that of Raoul Hyman, who will hope for a full season in GP3 after managing only one weekend in F3 last year. 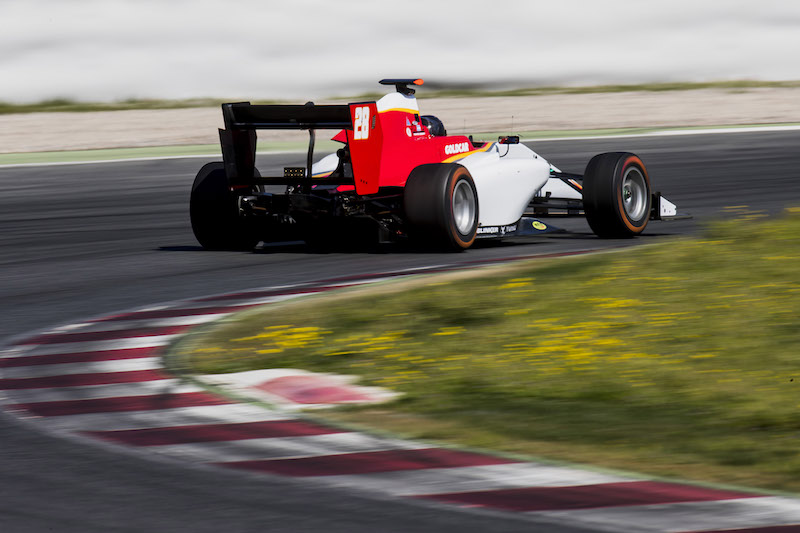