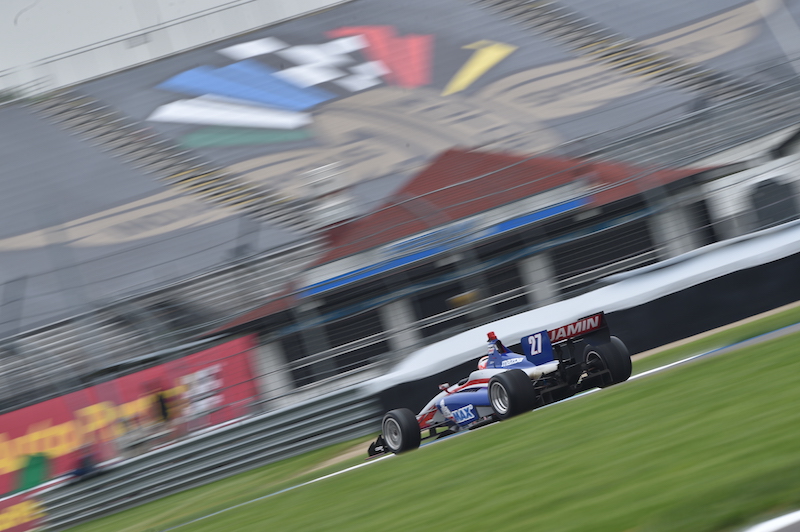 Frenchman Nico Jamin took a controlling victory on the Indianapolis road course after initial challenger and championship rival Colton Herta fell down the order with a punctured tyre.

The Pro Mazda graduate had taken his first pole in the morning?s qualifying session and had sophomore driver Zachary Claman De Melo on the grid alongside him.

It was championship leader Herta who made the better start, going four wide with those around him from third on the grid before braking late and taking the outside line to move into second. Eighth place qualifier Aaron Telitz had an even better start, jumping to third by Turn 1.

Telitz quickly dropped down the order though and it was Kyle Kaiser and slow starting De Melo who asserted themselves in third and fourth.

Herta meanwhile was trying to find a way past leader Jamin, and used a superior run through the final turn to attack into Turn 1 on multiple laps. Each time the Andretti driver was forced to take the outside line, resulting in a compromised turn in and dropping him back into the clutches of third place for a lap or two.

Just before half distance Herta made a mistake at Turn 7, allowing Kaiser and De Melo to close in and then overtake him before the end of the lap. This handed Jamin the breathing space he needed at the front and set up a fascinating battle between Kaiser and De Melo for second as Herta dropped down the order before pitting with a puncture.

The duo reduced Jamin?s lead over the next few laps, with Kaiser just about keeping De Melo at arms length. On Lap 22 of 30 a wobble by Kaiser set De Melo up, and the Canadian took second heading through Turn 1 on the next lap.

This slight delay had once again handed Jamin some breathing space, but De Melo put in his most complete performance in Indy Lights to date, taking three or four tenths out of Jamin every lap.

He looked to have done enough to make a last lap move possible, but a slow Dalton Kellett failed to move out of the way in time for De Melo, and Jamin crossed the line with eight tenths in hand.

Kaiser finished third, a repeat of last year?s result, with Neil Alberico a not too distant fourth.

Juan Piedrahita did not start the race due to damage to his chassis from his qualifying crash. He is still set to compete in the second race.