Going to Monza, Daniel Abt was just another good young driver. Nothing wrong with that, but Monza catapulted him into the spotlight, for all the right reasons. With so many eyes on the GP3 season finale, Abt produced a pair of stunning drives to nearly do the unthinkable and win both races and steal the title. He might have wanted the world to swallow him up at the end of Sunday’s race, but he’s got a lot to be proud of and most importantly he’s made people sit up and take notice.

Has 0.02 seconds ever been so crucial? It was that advantage over Antonio Felix da Costa that gave Evans top spot in qualifying at Monza. His starting position would become irrelevant as he hit trouble in the races, but without the four bonus points for claiming pole position that would prove to be decisive – with the final gap between Evans and Abt only two points. Rarely has a driver ever entered a junior racing season as such an overwhelming favourite, so defeat would have been a disaster. One relieved Kiwi.

As his British F3 rivals hit trouble at Silverstone, Jaafar claimed a win and two second places – his best weekend yet. It fired him back into the points lead at a crucial moment, as he’ll carry the advantage into the final weekend. Adding the British F3 title to his CV will be huge for the Malaysian, even if he’s in his third season. 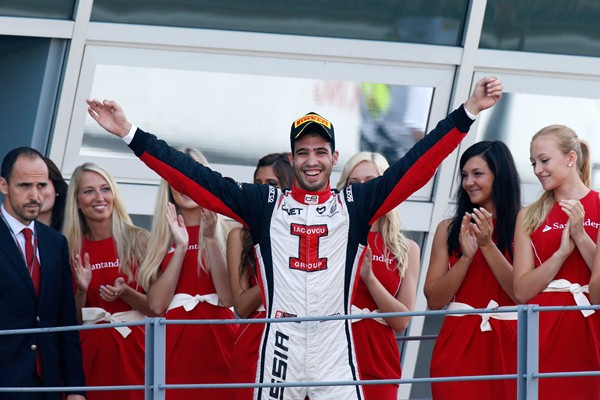 Ellinas ended the season with a smile on his face (Photo: GP3 Media Service)

After pre-season testing, Ellinas looked like he could actually be one of the only guys that would take the fight to Evans, despite his total inexperience at this level. Ultimately he didn’t quite have that kind of pace on race weekends, but he still shouldn’t have had to wait until the final round of the season to finally get on the podium. Followed up his second place in race one with victory in race two, and surely he now starts amongst the favourites for 2013 already?

After bursting onto the scene with victory in Monaco, Vainio’s title challenge gradually faded until Monza, where things could have been so different for him. Matching his teammate Abt would have given him the title, but he was unable to do that. Third in race one was going to keep him in contention though, but he made a suicidal error in not slowing down enough under yellows at the end. There really was nothing to gain from it, as any move on Ellinas ahead would have been frowned upon. Then he somehow managed to make the same mistake on Sunday.

A second non points-scoring weekend on the trot for Ceccon, and this time on home soil. Qualifying was an unmitigated disaster, managing only the 21st quickest time, running into a rival and then getting moved to the back as a penalty. Considering that, I guess 13th and ninth weren’t too bad. But he finished the year in ninth, some way away from eighth-placed Ellinas. It’s difficult to see what his next move is – after all GP3 was a step down for the Auto GP champion. 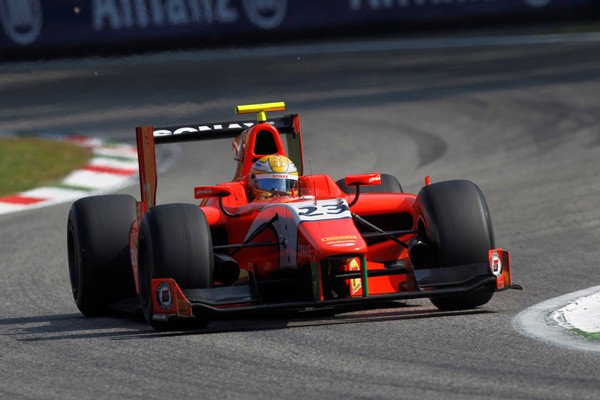 Razia's got work to do in Singapore (Photo: GP2 Media Service)

Razia had the better of Valsecchi from Bahrain onwards, but after letting the Italian draw level in their close battle, Monza saw Razia lose significant ground with no points scored. Not for the first time, the Brazilian’s qualifying result was uninspiring – 12th. Forced once again to fight his way up the order, he collided with Leimer, ending his race and earning a (slight) grid penalty. Unusually, he only had the pace to progress to 16th on Sunday. With neither Valsecchi nor Razia having had particularly convincing campaigns for fourth/fifth year drivers, whoever misses out on the title won’t have a lot to shout about. And Razia’s got work to do in Singapore to stop that being him. At least he gets another F1 run this week.

As bad weekends go, this one’s up there. Leading the championship with two events to go and in need of making sure he wins the title, Harvey finished the weekend with just two eighths and a 12th place. Third on the road in race one but penalsied for a jump start, he then finished second in race two but was penalised 30 seconds for clashing with Pipo Derani and given a five-place grid penalty for the third race for weaving in front of the Brazilian. Not only did he lose the standings lead, he’s dropped to third and 23 points off the lead.