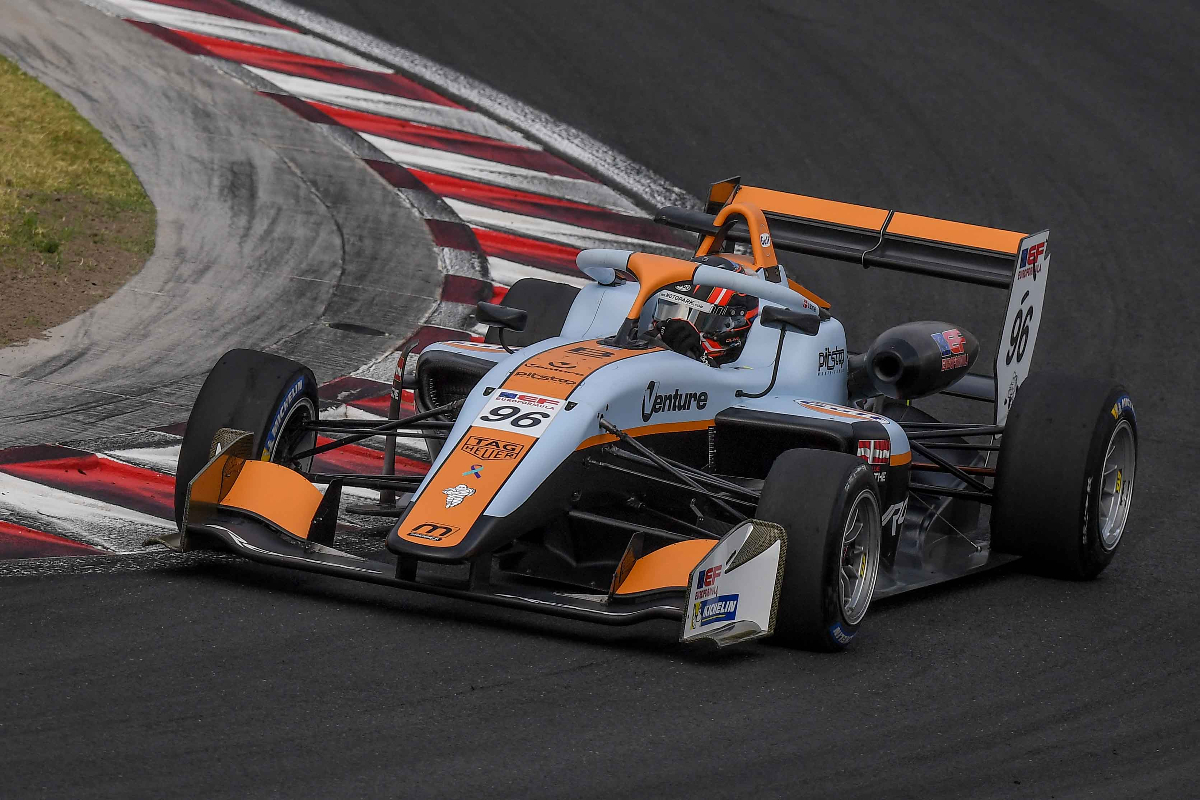 Lomko launched off the line well and immediately moved to the inside to defend, but then swept to the outside as everyone tucked into his slipstream.

As the cars headed downhill he then cut across to the inside again and led into turn one, with Goethe moving to the inside of front-row man Frederick Lubin to try to make a move. However Lubin stayed on the throttle and with the additional speed drifted to the outside where he was able to get level with Lomko on the exit.

Lomko had just enough of a nose ahead that Lubin had to tuck back in when they reached turn two, and by doing so that allowed Goethe to come around the outside of Lubin to take second when they swapped direction for turn three.

Goethe’s first go at Lomko came at turn two on lap two, trying the outside line and causing Lomko to wobble but with not enough loss of speed for a move to then be lined up through the next two corners.

He did not have to wait to long to move into the lead however, as Lomko took to the inside at turn one on lap three and Goethe used suprerior momentum on the outside to be alongside as they exited the corner.

That meant the inside line was his for turn two, and he got the move done then quickly pulled away despite a wobble at turn four that briefly sent him off the track. Goethe finished the 18-lap race with 9.779 seconds in hand over Lomko.

Lubin had dropped back from the lead battle before the first lap had even ended, but he still showed a more competitive pace than has previously been seen in his rookie Euroformula campaign and picked up his third podium of 2022.

Goethe’s main title rival Christian Mansell passed Josh Mason and Ayrton Simmons on the opening lap to get into fourth place and stayed there, with CryptoTower team-mate Mason settling for fifth place.

Motopark’s Alex Garcia passed BVM Racing’s Francesco Simonazzi on lap one and Drivex School’s Simmons on lap two to get into sixth, then closed in on Mason mid-race before dropping back into the clutches of Simonazzi.

Garcia resisted his attacks until the final lap, but it was Simmons who finished sixth as Simonazzi got a two-second track limits penalty and Garcia was penalised five seconds for the same reason. Simonazzi was classified seventh, ahead of Drivex’s debuting team-mate Benjamin Berta and Garcia. Vladimir Netusil finished 10th on his return.