Giovesi pipped by Karthikeyan to Auto GP pole at Mugello 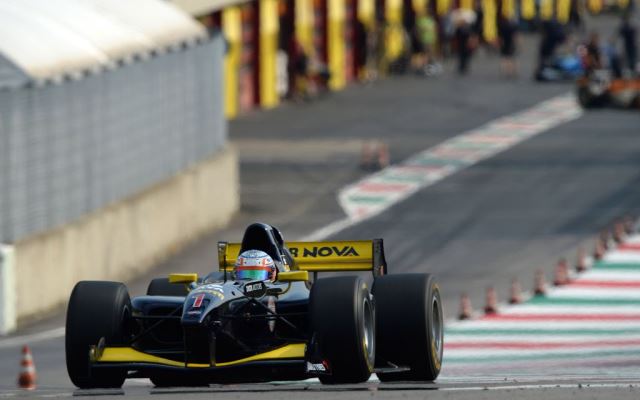 Kevin Giovesi was edged out by ex-Formula 1 driver Narain Karthikeyan by just 0.035 seconds in the fight for pole position at the fifth weekend of the Auto GP season at Mugello.

Giovesi, who returns to action in Auto GP this weekend after sitting out the last two GP2 rounds, went top with five minutes remaining before shaving a tenth off that effort two laps later.

Karthikeyan however narrowly bettered that just before the chequered flag came out, taking his second pole position from as many weekends driving for the champion Super Nova team.

His team-mate Vittorio Ghirelli had held top spot for some time before being dethroned by Giovesi, but even a late improvement was not enough to put him higher than third.

Sergio Campana took fourth, his quickest lap coming inside the opening ten minutes of the half hour session. It was good enough to see him finish one place ahead of championship leader Kimiya Sato, who was yesterday announced to be making his F1 debut with Sauber at next week’s Silverstone test.

Robert Visoiu, a race winner in GP3 since the last Auto GP round, was sixth, nearly a second behind his Ghinzani team-mate Ghirelli. Andrea Roda was just a further five thousandths of a second behind in seventh, with Meindert van Buuren eighth. Tamas Pal Kiss was ninth, with new Zele Racing team-mate and former F1 driver Christian Klien down in tenth but still a place ahead of GP2 regular Daniel De Jong.