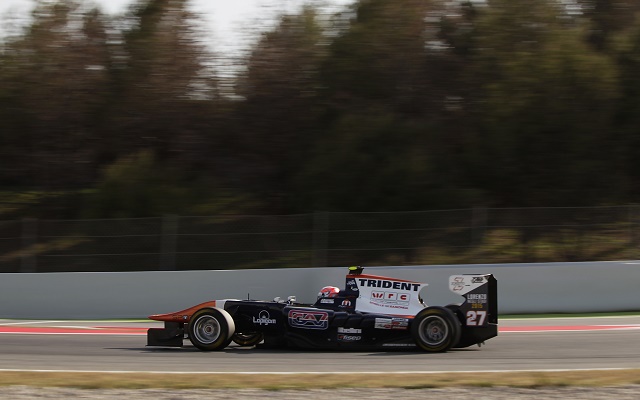 Trident Racing’s Luca Ghiotto showed his practice pace was no fluke by claiming pole position for the first GP3 race of 2015 at Barcelona.

This marks Ghiotto’s second pole in the series, the Italian having topped qualifying on his debut as a guest driver at Spa last year.

This time around, Ghiotto managed a very quick flying lap early in the 30-minute session and would go unmatched, with reigning FIA F3 champion Esteban Ocon coming a tenth behind.

The Trident driver looked set to improve on his benchmark later in the session as he strung together session-best times in sectors one and two, only to be blocked in the final part of the circuit.

But it didn’t end up mattering as Ocon and a number of others were prevented from putting in a late flyer by Carlin’s Antonio Fuoco beaching his rear wheels in the gravel in sector two and bringing out yellow flags.

Arden’s Emil Bernstorff will line up third on the grid ahead of Campos Racing’s Alex Palou, who makes his debut in the series.

Matheo Tuscher and Marvin Kirchhofer will make up row three of the grid, the latter just 0.009s ahead of teammate Alfonso Celis, who made it three ART cars in the top seven.

Oscar Tunjo will start his first race in GP3 from eighth, with experienced drivers Pal Varhaug and Jimmy Eriksson completing the top ten.