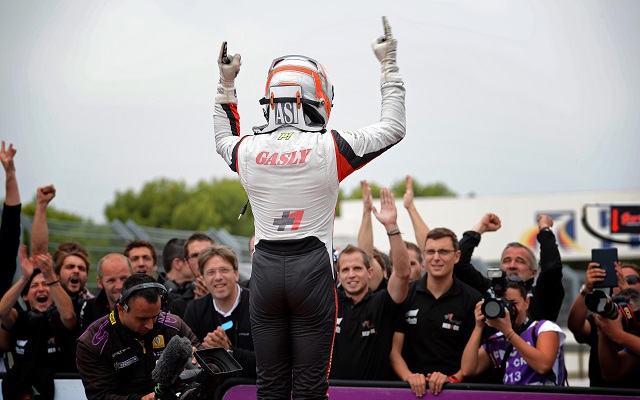 Pierre Gasly won the 2013 Eurocup 2.0 championship with a sixth-place finish in race two at Barcelona, after title rival Oliver Rowland received a drive-through penalty for causing a collision between the pair on the first lap.

Esteban Ocon benefited from the incident and managed to claim his second race victory of the season ahead of Nyck de Vries and Andrea Pizzitola.

The first lap descended into chaos when Rowland tried a move for the lead and clipped Gasly, sending the Frenchman into a spin and damaging his own front wing in the process. A number of crashes in the very same corner, which saw Bruno Bonifacio upside-down and lots of other drivers retiring on the spot, brought out the safety car.

Ten minutes later, Ocon led the pack at the restart as Rowland, who was in third, starting to slip down the order, massively slowed down by his front wing. The Brit then came in for the penalty, surrendering his title ambitions.

Gasly was in tenth under the safety car but quickly set about climbing through the field as the race restarted, passing Aurelien Panis and then dealing with the Lotus junior pair of Oscar Tunjo and Alexander Albon.

Out in front, Ocon was relatively untroubled by de Vries and went on to cross the line in first, with the Dutchman holding off Pizzitola for second.

Gasly finished sixth, ahead Albon, Tunjo and Panis, with Ukyo Sasahara picking up tenth after Victor Franzoni and Jack Aitken were removed out of points contention on the final lap.

Gasly, therefore, has been crowned the new Eurocup champion with a 16-point advantage in the standings over nearest rival Rowland, while the winner of the race Ocon finishes the season in third.

Gasly’s championship success completes a double for the Tech 1 team, who took the team title yesterday.