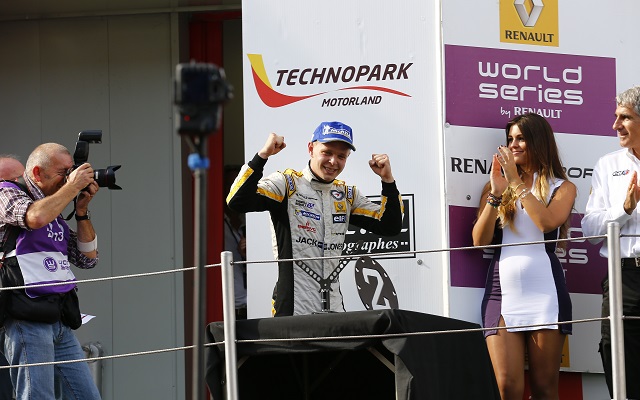 Kevin Magnussen, who was officially crowned champion yesterday, took another Formula Renault 3.5 victory, reigning supreme in the final race of the season at Catalunya.

The Dane held on to the lead off the start, but would come under some pressure over the next few laps with Stoffel Vandoorne, Arthur Pic and Nico Muller all remaining within two seconds off the leader.

He opted to stop on the next lap after Muller’s visit to the pits and rejoined safely ahead of the Swiss driver. Vandoorne would follow suit soon, his strategy not paying off as he lost out to Magnussen and was now under pressure from early-stopper Will Stevens.

AV Formula’s Pic remained a source of intrigue for another few laps, as the Spaniard was leaving his stop rather late, while lapping on-pace with Magnussen. However, he endured a slow visit to the pits and came out with a badly-attached wheel, which immediately forced him to pull over in the gravel.

As such, Magnussen was allowed to cruise to victory, which he did, building up his advantage over Vandoorne to nine seconds in the late stages of the race. The Belgian finished off his rookie season with a fine second place, which secured him the runner-up spot in the championship, whilst Stevens came home in third.

Muller took fourth, ahead of Norman Nato, who prevailed in a race-long fight against sixth-placed Carlos Sainz, Jr. A great late-stop strategy from Lotus allowed both its drivers to make the top ten, with Marco Sorensen taking seventh and Marlon Stockinger coming home in ninth, narrowly behind Nigel Melker. Oliver Webb rounded out the top ten.