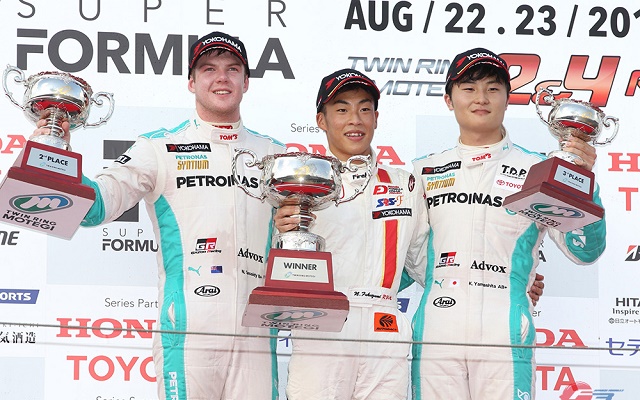 Fukuzumi led every lap of the way in both races, neither of which saw any changes in the points-scoring top six after the opening lap.

In race one, he led Nick Cassidy off front row and pulled away at a rapid pace, finishing a full eight seconds ahead of the Kiwi.

Yamashita was Fukuzumi’s main rival in race two and stayed within two seconds for the entire distance, but couldn’t defeat the Honda driver.

Takaboshi picked up the final podium spot, with Ishikawa fourth and Cassidy just fifth, down on pace. A first-lap collision between Sekiguchi and Lucas Ordonez allowed Tsubasa Takahashi to take the final point.

TOM’S pairing Cassidy and Yamashita are now level on points heading into the Sugo showdown, the Japanese driver ahead on countback of third-place finishes. Takaboshi, 15 points down, retains mathematical chances.

Both races in the National class went to 2015 champion Ryo Ogawa.