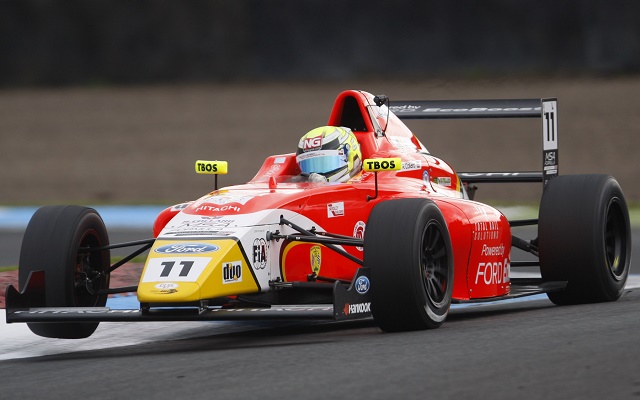 Lining up?third on the grid, Collard quickly made his way past Norris and settled in for second behind Dan Ticktum.

However, the Fortec driver’s woeful weekend continued as he received a drive-through penalty for a jump start.

As such, Collard became the race leader, followed by Colton Herta.

The Brit managed to maintain a one-second lead for a couple of laps?before having to deal with increasing pressure from Herta.

However, just as Herta looked to make a move, the safety car made an appearance, triggered by Petru Florescu.

The Romanian’s race saw?a premature end when an overtaking attempt on Josh Smith ended in a collision between the duo and his car stranded on the track.

A rocketing restart from Collard enabled him to pull away from Herta and the Arden driver was set to take the checkered flag with a comfortable lead.

Although a mistake on the penultimate lap made that gap disappear, he finished first nonetheless, closely followed by Herta.

Sennan Fielding rounded out the podium, which is his 11th consecutive top four finish in the series.

Arden duo Enaam Ahmed and Sandy Mitchell took fourth and fifth respectively, while Rafa Martins passed Norris during the closing stages of the race for sixth.

Although the penalty initially relegated him to 16th, Ticktum completed a great recovery race to finish eighth as the top ten was rounded out by Louise Richardson and Josh Smith.

Lloyd doubles up with race three victory at Eastern Creek