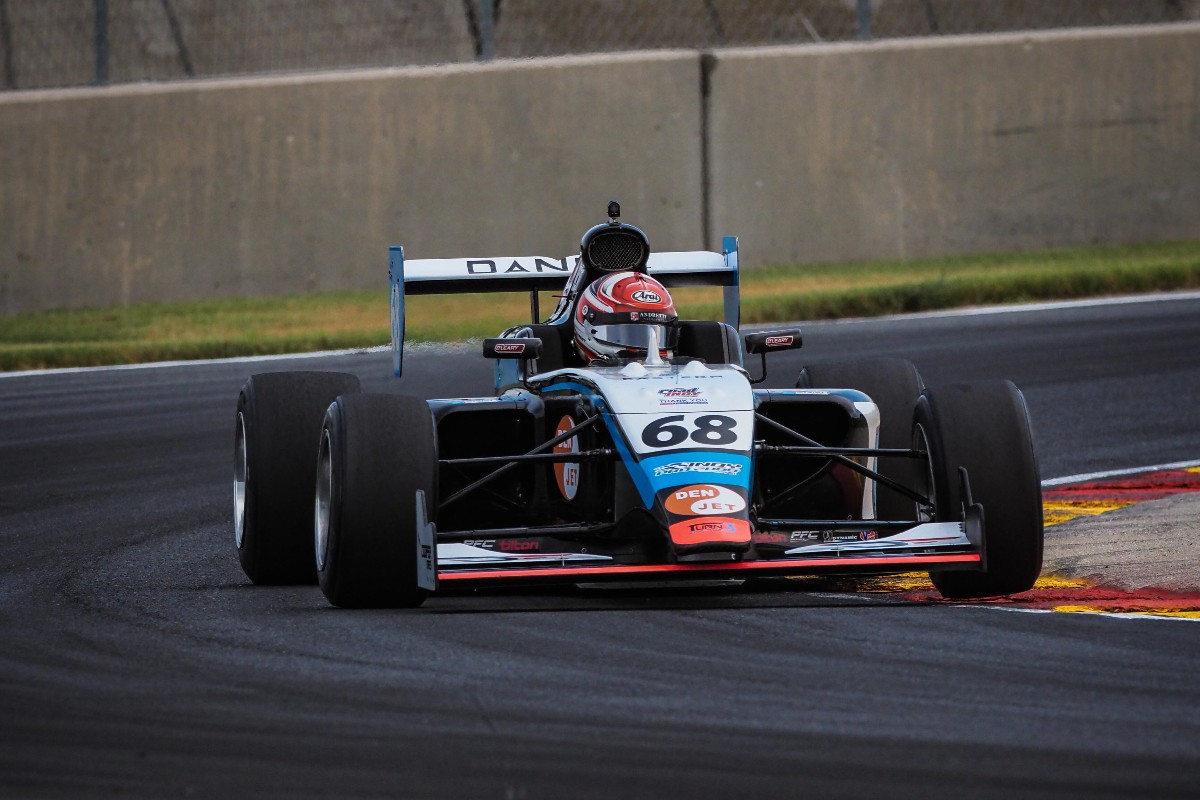 Turn 3 Motorsport’s Danial Frost came from last on the grid at Road America to win the season opening Indy Pro 2000 race in a photo finish.

Second-year racer Frost set the pace in qualifying, but was then excluded for a technical infringement and Devlin DeFrancesco – who was originally due to race in FIA Formula 3 Championship this year – was promoted to pole.

The race marked the debut for DeFrancesco and his Andretti Steinbrenner Racing team, and for a long time the combination looked to have the race in control.

DeFrancesco mastered the start to pull out a two second lead within the first lap, and he maintained that sort of distance to his pursuers for most of the half-hour race.

Frost meanwhile was on a charge from 16th and last on the grid, moving past eight cars on lap one and then another four on lap two to run in fourth.

It took until lap nine of 15 for Frost to track down fellow returnee Parker Thompson, who’s switched to DEForce Racing for his third year in the series, and he moved into second place with a pass on Pabst Racing’s Colin Kaminsky a lap later.

A penultimate lap personal best finally got Frost within a second of DeFrancesco, and he started hassling the rear of the leader in the middle of the final lap. He got side-by-side into Turn 12, and again out of the final corner.

The pair crossed the line alongside each other, with Frost having dragged past for victory by just 0.0556 seconds.

An off-track moment for Kaminsky allowed Thompson through to third with a few laps to go, but front wing damage started slowing him on the penultimate lap and then he stopped entirely on the final tour.

Kaminsky reclaimed third, ahead of Exclusive Autosport’s Braden Eves and Juncos Racing’s Sting Ray Robb, who had started 15th on the grid.

As fastest lap set the grid for race two, several drivers pitted for fresh rubber (while also sorting out car issues) and it was DEForce Racing’s Manuel Sulaiman who ended up with the coveted pole, albeit by finishing two laps down.

Juncos’s Artem Petrov and Pabst’s Hunter McElrea, who span, tried the same trick but missed out on the fastest lap and finished in 12th and 15th.