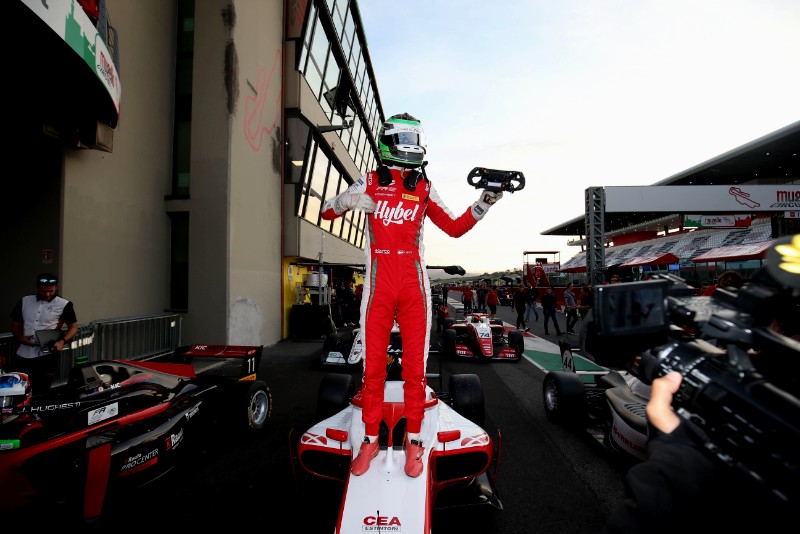 Frederik Vesti clinched the inaugural Formula Regional European Championship title with a round to spare at Mugello.

After two lights-to-flag victories in the first two races, Vesti needed one point in race three to become champion.

The Prema driver sat in third for much of that race before a tight battle with the cameoing Jake Hughes.

KIC Motorsport’s Hughes took third on the final lap and, though he tried to fight back, Vesti remained in fourth.

David Schumacher took victory for US Racing, ending a mixed weekend for the German.

In race one, he was passed by Enzo Fittipaldi off the line, allowing Vesti to escape in the lead. Halfway through he took second place from the Brazilian but could not catch Vesti. Hughes, on his debut, beat Fittipaldi to third.

Starting from pole for race two, Schumacher?s race was ruined before the formation lap even began. He had a turbo problem that, while eventually fixed, required his US Racing mechanics to remain on the grid after their allotted time.

Once the race started, Schumacher fell backwards and was forced to fight his way from fifth. He and debuting team-mate Lirim Zendeli spent most of the race behind DR Formula by RP Motorsport’s Igor Fraga, but Schumacher was eventually able to find a way through.

He dropped to the back of the grid shortly after, though, as the grid infringement earned him a drive-through penalty. The team eventually retired the car a lap before the chequered flag.

Zendeli was able to follow his team-mate past Fraga and finished second behind Vesti.

As in race one, Hughes spent the race battling Fittipaldi and beat him to third again. Fraga dropped back to fifth ahead of Van Amersfoort Racing’s Dan Ticktum.

Schumacher started from pole again for race three and this time kept the lead as Zendeli and Vesti initially fought for second place. The leader didn?t put a wheel wrong for the remainder of the race and finished six seconds clear of Zendeli.

In finishing third, Hughes took a hat-trick of podiums on his FREC debut.