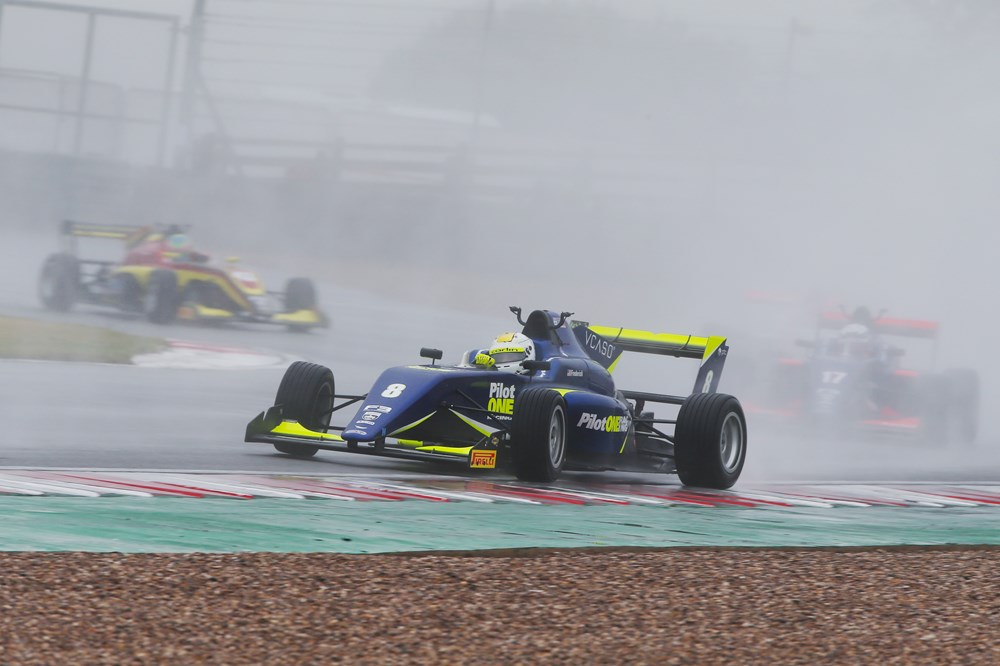 Carlin’s Kaylen Frederick took a commanding win in the third BRDC British Formula 3 race of the weekend at Donington Park.

Frederick started third but battled with pokeman Kush Maini at the start after a great launch. He was forced out slightly wide by Maini but was able to hold onto second.

Like Sundat morning’s race, the conditions were wet and misty and far from ideal to drive in.

A few laps into the 12-lap encounter, Frederick made his move on Hitech GP’s Maini to take the lead.

From there, he went totally unchallenged as several cars behind scrapped over the remaining podium spots, and set fastest lap on the final tour for good measure.

Chris Dittmann Racing’s Josh Skelton came out on top of that cracking battle for second, beating Maini in a drag race to the line by a tenth of a second.

Skelton initially passed Maini after working his way past Douglas Motorsport’s Kiern Jewiss, but both drivers were able to keep with Skelton.

The trio at one point went three-wide, with Maini coming out on top in that tussle, in which Double R Racing’s Louis Foster also featured heavily.

CDR’s Nico Varrone battled for fourth, while Jewiss took fifth after launching over the kerbs at the chicane on the final lap.

Race one winner Foster was sixth despite being in that podium scrap, ahead of Double R’s Benjamin Pedersen and reversed-grid race winner Ulysse de Pauw.