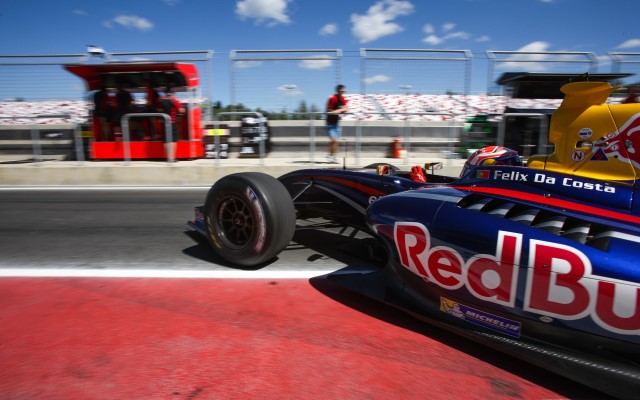 Antonio Felix da Costa is arriving in Austria for this weekend’s round of the Formula Renault 3.5 off the back of a day and a half testing Red Bull’s current Formula 1 car.

Most have him pencilled in as the next driver that the energy drink firm will take into F1, a position he got himself into with some stunning performances at the end of last year.

But the man himself is aware that his form this year has not lived up to expectation. The Portuguese driver lies third in the standings behind McLaren duo Stoffel Vandoorne and Kevin Magnussen with just one 2013 win to his name, and has said to the press this week that he needs to raise his game in FR3.5 if he is to truly deserve a graduation to F1.

While the Silverstone test provided a great opportunity for him to show the F1 team what he can do, the pressure for him to perform this weekend is possibly even greater.

That’s because the venue is the Red Bull Ring. It’s a first visit for the World Series by Renault to the circuit revived by Dietrich Mateschitz, and where greater for Felix da Costa to please chief hirer and firer of talent Helmut Marko with a victory or two?

The form guide certainly tells you that he needs to raise his game though in order to achieve that. At each of the five meetings so far this season, Felix da Costa has played second fiddle to either Vandoorne (Monza, Moscow) or Magnussen (Motorland, Monaco, Spa).

He recognises well enough that although third in the standings is solid, it’s not what was expected of him. He’s been hard on himself when he hasn’t beaten that opposition, like in the first Spa race when he was quicker than the winner Magnussen but failed in his attempts to overtake, knowing that he’s not been meeting the high targets that set themselves after those late-2012 results.

While many expected Felix da Costa to carry that run of form into 2013, others had their reservations based on a mixed career history. His double GP3 win at Hungary, four wins from the last five FR3.5 races and Macau Grand Prix success were no fluke. They might have been a bit of a surprise, but this was a driver who was highly-rated from his time in Formula Renault 2.0 in 2008 and 2009. However, while he’s had that promise, he hasn’t always showed it. In particular, his 2011 GP3 season, where he stumbled to 13th in the standings, raised a question mark. Sure, not all the circumstances were in his control, but it certainly left a doubt over whether he could always perform to the best of his ability.

In 2013 he needed to keep demonstrating the talent he has. So far, he hasn’t really done that. The Red Bull Ring is a great place to start doing it.

While it’s hard to look beyond the top three of Vandoorne, Magnussen and Felix da Costa in terms of the title fight, there’s a group of four drivers behind them who have all done a good job so far this year. Will Stevens is just eight points behind Felix da Costa and chasing his first win in the series, and another to fly straight to Austria from Silverstone, where he made his F1 test debut with Caterham. Switzerland’s Nico Muller needs some more podium results to add to his Monaco win, while Nigel Melker needs a win after podiums in Spa and Moscow. Arthur Pic has done a solid job with the new AV Formula team and will want to repeat some of the strong drives he had in the opening races.

There’s one driver though who’s likely to have even more eyes on him this weekend than Felix da Costa or anyone else. Sergey Sirotkin has had a promising start to his rookie FR3.5 campaign and lies eighth in the points, but Monday’s news that he’s joining Sauber on a development programme to fast-track him into F1 next year was met by plenty of uncertainty. Having being off the mainstream radar in his career up to now, the pressure is on to perform in the spotlight and prove he’s capable and deserving of making that F1 step already.