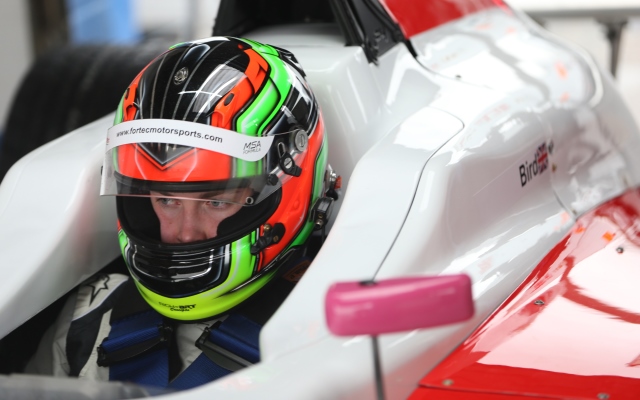 Fortec Motorsports has finalised a full four-car line-up for the second year of MSA Formula with the signing of Ginetta Junior convert Frank Bird.

Bird made his car racing debut in the Ginetta Junior series last year, racing on the same bill as MSA Formula, and was 22nd in the standings with a best finish of 11th.

The 16-year-old’s father Paul Bird is known for his eponymous motorcycle racing team and for success as a driver in national rallying, but was recently banned from sport for two years after failing a drugs test.

Fortec team manager Dan Mitchell hopes that Bird Jr can develop during 2016 and become a frontrunner in his second season.

?Frank has spent a year competing in Ginetta Juniors and hasn?t done any karting so in many respects he?s a proper single-seater rookie,” said Mitchell.

“We took him on last summer and he?s been working with us a lot as part of our driver development programme.

?The target for this season is constant improvement and to get him to the front of the Ford MSA Formula grid within two years. As long as he keeps improving throughout the year we will be happy.? I would like to think that in his second season he?ll be a strong favourite for the title.?

Bird added: ?2016 will be a learning year. I know the season is going to be tough, but I know I will have a great team around me supporting me all the way and I?m looking forward to seeing how I fare against fellow Ginetta Junior graduate Jamie Caroline.

?The Ford MSA Formula is an ideal series in which to start my single-seater career. It really is exciting times, to be racing with the Fortec team and competing in motorsport where my Dad has such a great background.”