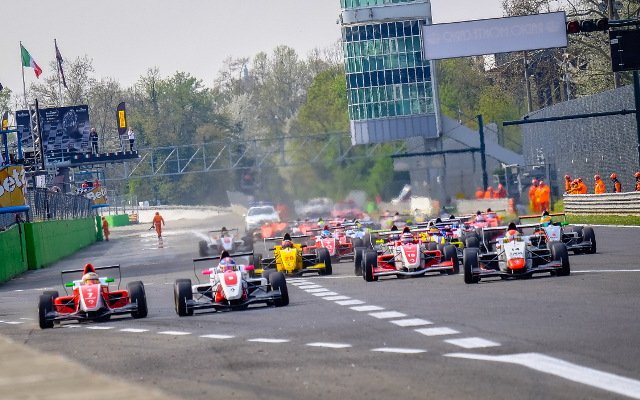 The 2016 Formula Renault 2.0 schedule is taking shape with full versions of the Eurocup, Alps and NEC calendars having been released.

Six of the seven Eurocup venues had been named last month with the revelation of a Monaco Grand Prix support slot (taking over from Formula Renault 3.5 after the manufacturer dropped its support of the latter).

The final circuit has now been confirmed as Monza, to be held at the start of July as the third round after Aragon and Monaco.

The season will be rounded out by four events supporting European Le Mans Series rounds at Spielberg, Paul Ricard, Spa-Francorchamps and Estoril.

Just one race will be held on the Monaco weekend – in-keeping with FR3.5’s visits – while there will be three at Aragon and Monza and two at each of the ELMS meetings.

Monaco, Monza, Spielberg, Paul Ricard and Estoril are all new additions to the Eurocup schedule compared to 2015, with the Hungaroring, Silverstone, Nurburgring, Le Mans and Jerez making way.

Official tests have been confirmed for the end of this season at Jerez (19 October), Aragon (18-19 November) and Paul Ricard (23-24 November), while pre-season tests will be held in early 2016 at Estoril, Aragon and one other circuit on the calendar.

In other details firmed up by Renault Sport, a new engine will be introduced in 2018, likely coinciding with a new FR2.0 car. 17-inch Michelin tyres may be introduced for next season.

As has been the case in 2015, teams will be able to enter between two and four cars plus any wildcard drivers, though these will not be allowed for Monaco.

During Renault’s involvement in FR3.5, the Eurocup champion has received a scholarship fund to make the graduation, and 3.5 promoters confirmed last month that this will remain the case for whichever driver becomes 2015 Eurocup champion at Jerez next weekend.

Renault has worked with the promoters of the Alps and NEC series (Fast Lane and MdH) to avoid date clashes to allow drivers to do a dual programme, specifically to obtain superlicence points with 10 on offer to the champion of each FR2.0 series.

Both Alps and NEC will also have seven rounds each, and unlike in the Eurocup, the identities of the circuits making up these schedules are largely unchanged from 2015.

In Alps, the only venue changes are Mugello in for Misano and the season finale in Spain moving from Jerez to Barcelona. A Pau Grand Prix support slot remains – expected to be used as a warm-up for Monaco just one week later – following Imola and Spielberg, with Spa, Mugello, Monza and Barcelona rounding out the season.

The Monza and Barcelona dates will support the International GT Open and Euroformula Open, events that the 3.5 series is also expected to feature at.

The NEC calendar will feature the same seven circuits as in 2015 and expected to be in the same order: Monza, Silverstone, Spielberg, Spa-Francorchamps, Assen, Nurburgring and Hockenheim.

Monza, Silverstone, Spa and the Nurburgring will again support the Blancpain Endurance Series, with Spielberg and Hockenheim alongside ADAC GT Masters and F4 once more.