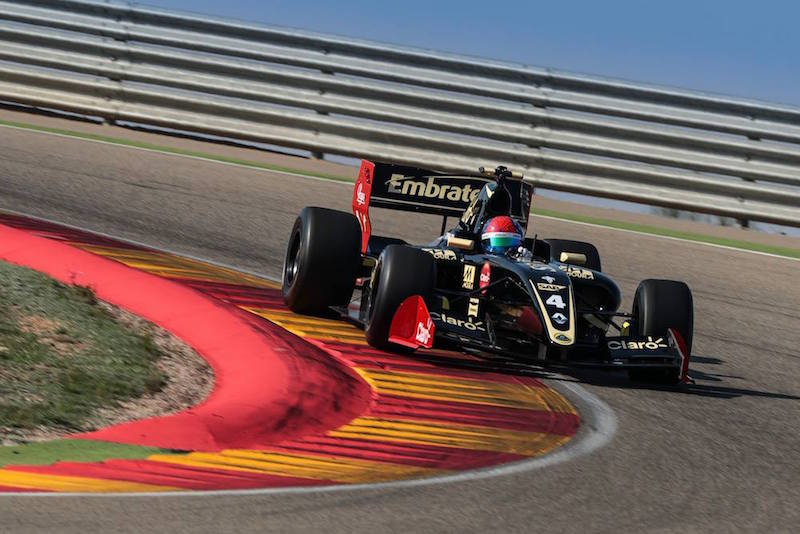 Pietro Fittipaldi started his second season in World Series Formula V8 3.5 by topping the times on the first day of testing at Motorland Aragon, ahead of former team Fortec Motorsport?s drivers.

With a field of only 12 drivers taking part, Fortec dominated the morning session.

It was the more experienced Alfonso Celis Jr. who had the upper hand early on, setting the pace ahead of Roy Nissany and Egor Orudzhev, but the Mexican?s new team-mate Diego Menchaca wasn?t far behind.

With less than an hour to go before the lunch break, rookie Menchaca jumped to the top of the timings with a lap time of 1m41.496s, which wouldn?t be beaten until the closing stages of the afternoon session.

Fortec?s pace didn?t disappear in the afternoon, but neither driver would hold the top sport for very long. Fittipaldi spent most of the afternoon towards the top end of the field, swapping the top time with Nissany and Matevos Isaakyan with times in the low 1m42s.

It wasn?t until the final flurry of on track action that Menchaca?s morning time would be beaten, with the top lap time dropped as every driver crossed the line on their penultimate laps of the day.

It was Fittipaldi who would eventually finish top with a time of 1m41.226s, ahead of Menchaca and Celis.

With good conditions and a relatively quiet track, there were few incidents throughout the day. The red flag was brought out twice in the morning, when both Barone Rampante drivers found themselves in trouble at turn five. Damiano Fioravanti has joined gentleman Giuseppe Cipriani at the team for testing despite having previously announced a race deal with RP Motorsport.

The same turn caused trouble in the afternoon, when Konstantin Tereschenko stopped there, bringing out the yellow flag and ruining laps for a number of drivers in the process.

Tereschenko was joined at Teo Martin Motorsport by Canadian former GP3 driver Nelson Mason, but he completed only one lap in the morning and didn?t post a time.