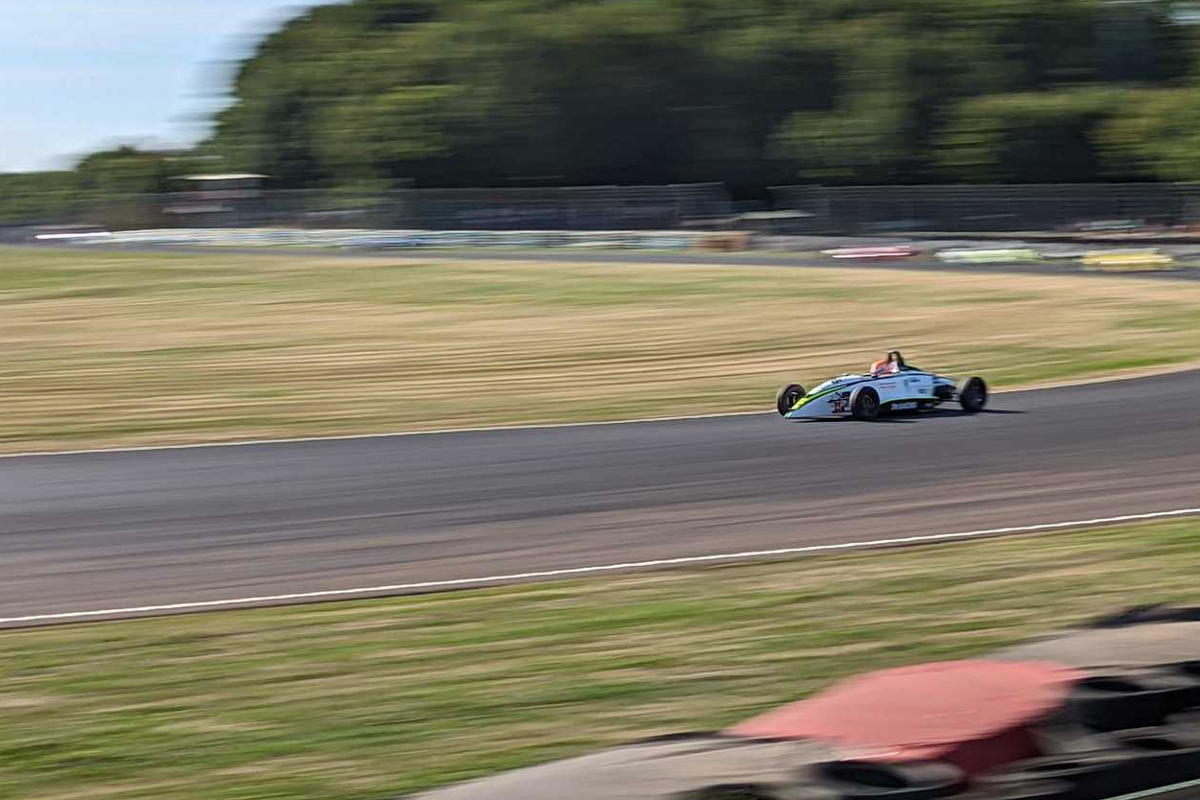 The TM Racing driver, brother of two-time champion Josh Fisher went into the final round one point ahead of title rival Luke Cooper and only needing to drop score compared to Cooper’s two.

However the pair were both bettered in qualifying by Ammonite Motorsport’s debuting Thomas Schrage, who set the pace by 0.087 seconds ahead of Fisher on his first ever visit to Castle Combe.

Schrage and fellow Team USA scholars Elliott Budzinski and William Ferguson were taking part as preparation for the FFord Festival, and Budzinski and Ferguson qualified fourth and fifth behind Cooper.

Fisher took the lead from Schrage around the outside of Folly on the opening lap of race one, and Cooper managed to get through too.

Cooper spent several laps sitting right behind Fisher, and went for the lead on lap five of 10 with a good run through Quarry. He led by a tiny 0.094s at the end of the lap, and Fisher was then shuffled down to third not long after by Schrage.

All the circuit experience of Cooper left Schrage with little chance of getting past him, and he finished half a second behin. However Fisher got the points for second place, as the Team USA drivers were competing as guests ineligible to score, and it meant Fisher was provisionally crowned champion.

“I didn’t put tup too much of a fight [when I saw them battling ahead], I thought ‘time to stick with your head for a change’,” an emotional Fisher said after the race. “We’ve done it. we’ve finally done it.”

Budzinski finished fourth after passing Adam Higgins and then Kieran Attwood, twice, while Higgins dropped to seventh late on behind Ferguson.

An impressive drive by Ben Mitchell in a Merlyn Mk20 meant he came through from a pitlane start to finish 11th.

Fisher had pole for the season-ending second race of the day, and converted it into victory despite Cooper getting by on the opening lap. He reclaimed the lead on lap two, but Schrage then came through from third to pass both and go into lap three in the lead.

Springbridge Motorsport’s Tom Hawkins made it a four-car fight at the front, but couldn’t get himself into a podium position and dropped back in the second half of the race to fifth place behind Ferguson.

The other three drivers disputing the lead continued to battle until the end, with Fisher pulling off a move on the inside of Schrage at Quarry corner on lap six to take the lead. Cooper then followed him through, and set fastest lap on each of the remaining laps but finished 0.126s behind Fisher. Schrage was just another 0.259s back in third.