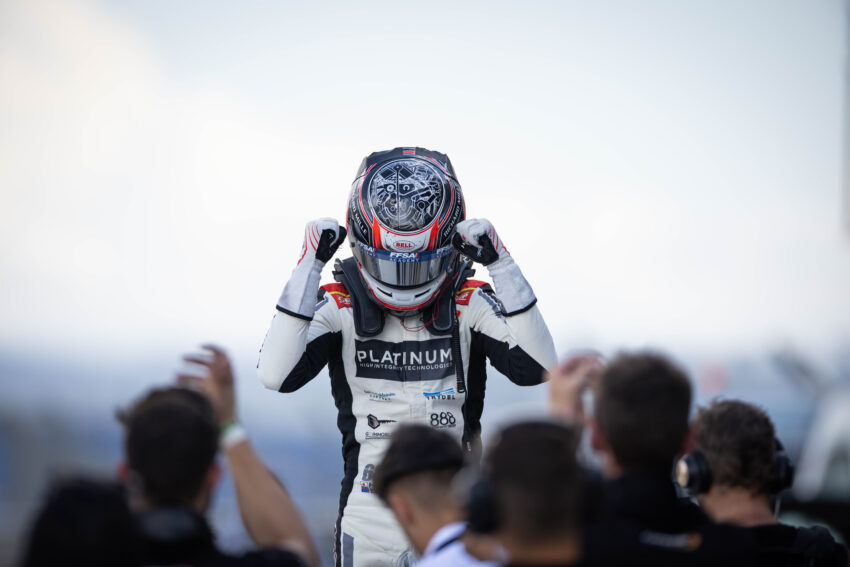 Aside from a brief challenge off the line from MP Motorsport’s Kirill Smal, Barter was mostly unchallenged despite a late safety car period.

Smal ran wide exiting turn one on the opening lap, allowing Barter’s Campos Racing team-mate Nikola Tsolov through into second place. He was gradually gapped by Barter but comfortably held his position ahead of Smal until the safety car period.

Caused by MP’s Tasanapol Inthraphuvasak beaching his car in the gravel, the safety car period was called almost two laps before the drivers actually came to follow the safety car itself on track. On the lap preceding the field catching up to the safety car, Smal passed Tsolov at the last corner and there was a swapping of places between Daniel Nogales and Valerio Rinicella. Nogales and Rinicella appeared to pass each other again, while Smal did not move back behind Tsolov either during the safety car period or on the final lap restart.

The podium ceremony went ahead with Smal in second place, but post-race a notice did come through that the safety car procedure was under investigation.

While that remains under investigation, MP’s Timoteusz Kucharczyk is classified fourth ahead of Drivex School’s Gael Julien, Rinicella and Nogales.

In eighth place was series debutant Noah Stromsted, who was one of four drivers who was penalised two seconds for repeated track limits violations.

Stromsted had a tricky race, falling from fourth to sixth in the opening corners before getting back by Julien for fifth before the end of lap one.

However he then repeatedly struggled with lock-ups, and eventually fell to seventh place. He reclaimed sixth from Rinicella on lap six of 15, then passed Julien again just before the safety car was summoned.

The penalty dropped him back to eighth behind them, with Robert de Haan and Georg Kelstrup filling the final points positions.

In addition to Inthraphuvasak’s off, Ricardo Escotto also ended up in the gravel before the safety car was summoned, and Vladislav Ryabov’s race ended in the pits.