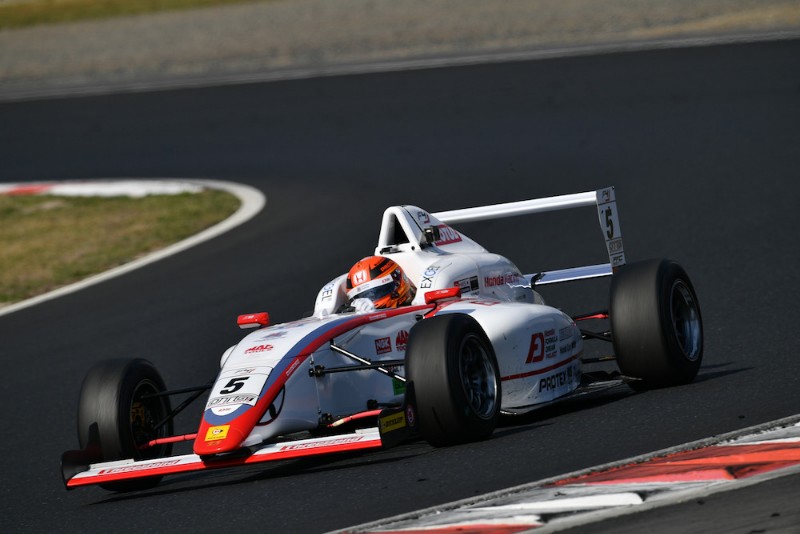 Honda Formula Dream Project driver Yuki Tsunoda dominated the opening round of the Japanese Formula 4 season, but a first lap spin meant he left Okayama fourth in the standings.

Tsunoda started his second year under the eye of Honda with pole, but it all went downhill at the start of the first race.

Field Motorsport’s Kiryu Hosoda made a better start from the the front row to take the lead into First Corner, and Tsunoda was then spun out by HFDP team-mate Takuya Otaki at Attwood Curve, leading to him retiring from the race. Otaki dropped to fourth, behind team-mate Teppei Natori and Media Do Kageyama Racing driver Shinji Sawada.

Hosoda and Natori broke away up front, with Sawada and Otaki also establishing a gap over those behind.

Natori kept within half a second of Hosoda, and gradually got closer as the race went on. With four laps to go he dived down the inside of the hairpin, taking the lead and pulling away to win by over two seconds.

On the same lap as Natori took the lead, Otaki relinquished his pressure on Sawada by going to the pitlane to serve a penalty for the incident that put out Tsunoda.

Remarkably Tsunoda was the only retirement in the 30 car field, with the 29 finishers spread by just 1m08.907s.

Tsunoda got to demonstrate his pace in the second race, winning by 16 seconds in an imperious display.

This time he didn’t lose the lead from pole, and simply drove away from the field, setting a fastest lap that was almost nine tenths better than anyone elses.

Hosoda and Sawada finished second and third once again, with race one winner Natori behind them in fourth, but with the championship lead.

Kanazawa and Ogawa battled for position again, this time for fifth, which Kanazawa triumphed at. Hiraki was seventh, ahead of Kawaii, HFDP driver Ren Sato and Suganami.

Natori only has a one point lead over Hosoda at the top of the standings, with Sawada a further six back in third.