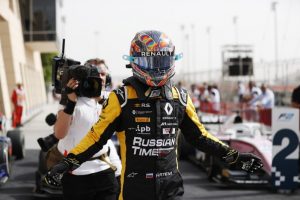 Artem Markelov took his seventh career win in the Formula 2 sprint race at Bahrain, controlling the tyre wear as others wilted in the heat.

The Russian Time driver started the race in fifth, and rose to third immediately with the assistance of ART Grand Prix’s George Russell and Prema’s Sean Gelael stalling, with pole man Gelael doing so on the warm-up lap.

Despite the ever present issue of heavy tyre wear, de Vries stormed off into the distance, with Gunther holding off the attacks of Markelov, who was renowned as being as master of controlling tyre wear using the previous F2 car.

Markelov eventually found a way past, but has no answer for de Vries’ pace.

On lap 9 of 23 de Vries pitted, with his Prema team attempting to replicate the strategy used in 2017 with champion Charles Leclerc, who pitted then stormed back up to the front to win the Bahrain sprint race.

The pitstop took him down to 13th, with Markelov inheriting the lead over Gunther, and Carlin duo Sergio Sette Camara and feature race winner Lando Norris moving into third and fourth.

Over the remainder of the race de Vries, on fresher tyres, hunted down those in front, while the top four tentatively looked after their tyres whilst trying to fight over position.

Arden believed Gunther had the pace to challenge for victory, and asked him to move his brake balance forward. Shortly after doing that he locked up his front left heavily, which brought the two Carlin cars on to his tail.

Meanwhile de Vries had made his way up to sixth, and was closing in on Campos Racing’s Luca Ghiotto for fifth. When he did make his way past he was still several seconds off the back of Norris, and with only a few laps to go to close the gap.

Gunther’s lock up had gifted Markelov a gap up front, and he finished the race over two seconds ahead of the German.

A few attempted moves by Sette Camara only brought him further into the clutches of Norris, but the Brazilian managed to hold off his team-mate, who had a five second gap to de Vries at the end.