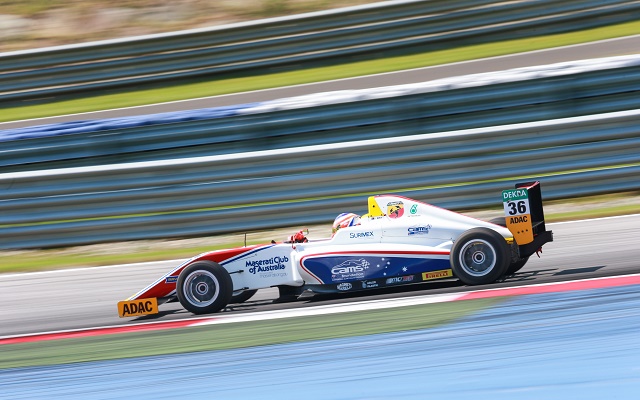 Mawson held pole and led every lap of what limited green flag running there was in race three at Spielberg as he became the fourth different winner in the ADAC F4 series, but that’s unlikely to be the main discussion point after the round, which had already seen Mick Schumacher sidelined with a fracture in his hand.

This time out, a very heavy opening lap crash for Ferrari protege Guan Yu Zhou led to a lengthy stoppage and, when the race resumed with just ten minutes of green flag running planned, it was soon abandoned for good four laps later.

It all got dicey right from the get go, Mawson chopping across the line to keep fellow front row starter Janneau Esmeijer behind.

Esmeijer’s entry into Castrol Edge was somewhat compromised and saw Mattia Drudi forced wide. And, as the Italian returned to the track, he moved over on Ralf Aron and was turned into Zhou and Neuhauser’s Tim Zimmermann.

Both Drudi and Zimmermann were done for the day, but the damage to their cars seemed light compared to Zhou, who rolled heavily in the grass, his Prema machine turning into a mangled mess. The Chinese driver was quickly helped out of the car and is currently in the medical centre.

The race direction didn’t even have the time to call out a safety car as another crash happened further down at Remus. Aron, his car damaged after contact with Drudi, couldn’t get the car stopped for the corner and hit the side of Joel Eriksson.

With the race red-flagged, Aron left his car stranded and spectators were treated to a rather comical view of it sliding downhill out of control and bumping into Eriksson’s vehicle.

Naturally, a lengthy clean up was required, after which the race restarted under the safety car.

When the green flag flew again, there were ten minutes on the clock and the first few laps of racing were perfectly clean – Mawson and Esmeijer maintaining position, with David Beckmann rounding out the provisional podium.

But the carnage returned at Castrol Edge, with Florian Janits missing the braking point and clattering into Job van Uitert – albeit both managed to resume. On the same lap, Robert Shwartzman had a go on teammate Beckmann and tapped him in the right rear tyre.

Beckmann slid sideways but miraculously held on, but Shwartzman was not so lucky, breaking his front wing. But, just as Esmeijer was all over Mawson for the race lead, another safety car was called out – although there seemed to be no cars stranded on track.

A minute later, the race was called, Mawson getting the win from Esmeijer and Beckmann. Michael Waldherr notched his third top-five of the weekend in fourth, with Motopark teammate Jonathan Cecotto right behind.