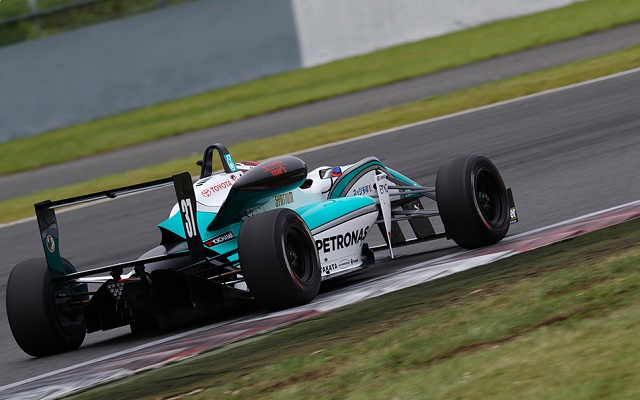 Kiwi racer Nick Cassidy secured his fourth victory of his debut season in Japanese F3, winning the second race of the Fuji round.

Cassidy, starting from pole, was shuffled down to third, but recovered to claim a win for TOM’S, their eighth consecutive in the series.

The championship leader’s getaway off the line was hardly poor, but B-Max rival Mitsunori Takaboshi was better, squeezing past Cassidy on the inside into turn one. A very late-braking Nirei Fukuzumi also dashed past, leaving the Kiwi and teammate Kenta Yamashita in third and fourth.

But, for Cassidy, Fukuzumi proved a very temporary obstacle, the poleman slipstreaming past the HFDP driver at the end of lap one.

He then set out after Takaboshi, making relatively quick work of his 1.6s lead. Yet passing the B-Max driver proved much more difficult as Cassidy stayed within half a second lap after lap, but was unable to find a way past.

Cassidy was not particularly close to Takaboshi entering lap 16, but a look on the outside into turn one forced the race leader to cover. That was all the Kiwi needed, quickly switching to the inside line and easing past Takaboshi under braking.

The B-Max driver stayed close to Cassidy over the remaining distance, but couldn’t challenge him and had to do with second.

Cassidy’s TOM’S teammate Yamashita was himself stuck behind a rival’s for several laps, having briefly passed Fukuzumi for third on lap four into Panasonic, only for the HFDP driver to use the slipstream and get back through.

It took Yamashita another seven laps to clear Fukuzumi for good, the TOM’S driver doing so with an aggressive move into turn one. Fukuzumi was forced off-track and lost time, rejoining just ahead of Daiki Sasaki, who he kept at bay for the remainder of the race.

Close behind the two, Keishi Ishikawa completed the top six, while Ryo Ogawa in tenth won the National class honours yet again.

Cassidy now leads Yamashita by nine points in the standings, with Takaboshi a further seven behind.