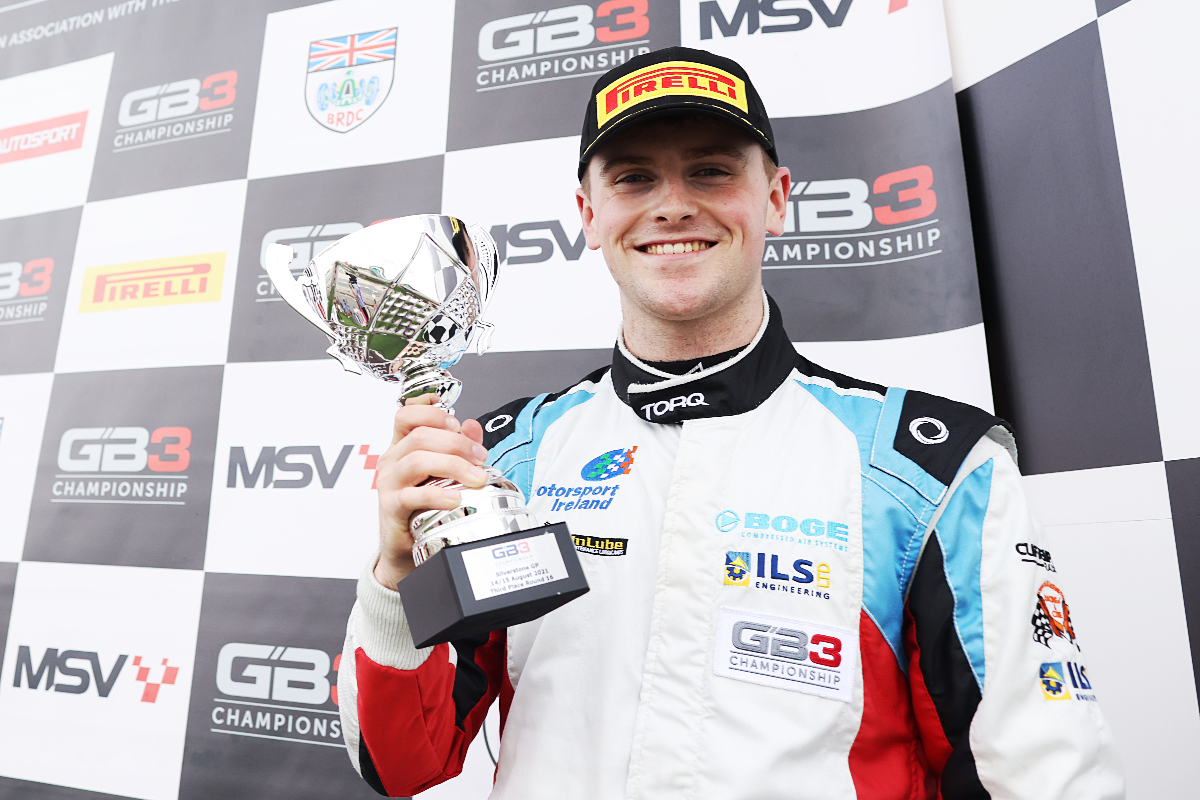 Jonathan Browne says it was “a dream start” to finish third in his first ever slicks-and-wings race at Silverstone last weekend in GB3.

The 2019 Formula Ford Festival winner impressed on his series debut by qualifying fourth in a rain-affected session and then converting that into a podium finish in his maiden race with Hillspeed, who were making their first appearance of 2021.

Browne was unbeaten in Champion of Brands last year in the small wingless FF1600 category, but had only completed three test days in a GB3 car prior to debuting on Silverstone’s Grand Prix layout, which he had not driven before pre-event testing.

In testing he was 1.2 seconds off the pace, but fourth fastest in the wet final session of Thursday, and told Formula Scout that in qualifying: “When I saw it was raining I knew I had a chance, but never knew it would be that high.

His final effort on wet-weather tyres did indeed secure him a spot on row two of the race one grid, and he moved up to third at the start of the race.

Browne then inherited second after Fortec Motorsports’ Ollie Bearman lost his rear-left wheel due to a wheel nut failure, but conceded it to Bearman’s team-mate Roberto Faria after a safety car period. He then held his own for the remainder of the encounter to finish third.

“A dream start,” said Browne afterwards. “I fully expected to just drive in the pack today, to be at the front of the pack was even better.

“The pace was alright, I didn’t have the most confidence on the brakes. There’s more time to come from myself, and it was good to learn how to drive in dirty air and safety car restarts.”

After starting further down the field for Sunday’s two races, Browne came home in 12th and 13th respectively, and admitted he had learned a lot from the experience.

“First one I struggled with the car balance. I had a bit of a messy lap and lost a few spots. Last race was pretty good pace-wise, I just was stuck in dirty air so was trying to learn how to cope with that.

“It’s a steep learning curve. There’s so much to learn with the slicks-and-wings. You just arrive at the corner compared to FFord like 20mph quicker and you’re not braking.”

Reflecting on his first GB3 race weekend, Browne added: “I’m happy with how it went. I could have never imagined a podium, but then today was slightly tougher. I’ll reflect on it and I’ve learned a hell of a lot.”

Browne will contest the remaining two rounds of the season with Hillspeed, and will be up against his former FF1600 team-mate Bryce Aron who raced for Carlin in GB3.