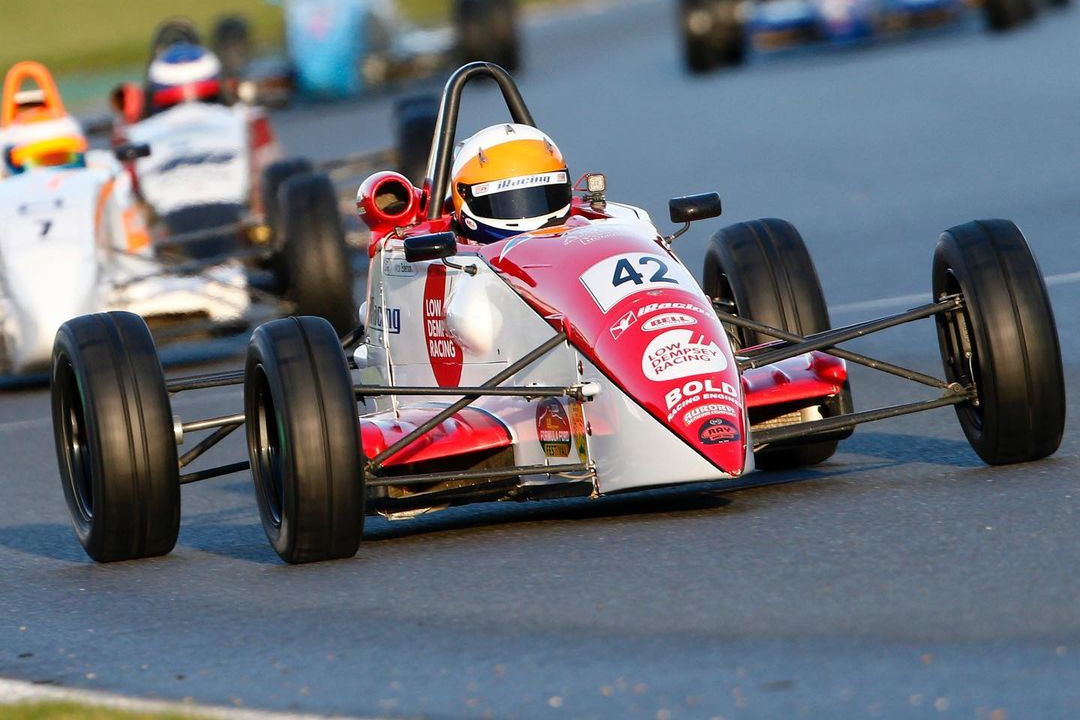 Max Esterson took a win and a second in the second Road to Indy eSeries round, as he prepares to race in the United Kingdom this year.

The 18-year-old American has signed with Low Dempsey Racing to compete in BRSCC National Formula Ford 1600 as well as other events on the UK’s FF1600 calendar.

“I haven’t raced since the Walter Hayes Trophy at the end of October, so I’ve definitely got the itch to get going again,” said Esterson upon signing.

“I’ve spent a lot of time on the sim this winter learning unfamiliar tracks and running in some big iRacing events, but I’m ready for the real thing.”

His latest iRacing commitment was the Road to Indy Esports races on Detroit’s Belle Isle street circuit, where he was second in qualifying to Exclusive Autosport’s Braden Eves.

The pair got away cleanly at the start of race one, while BYRD Racing IndyCar racer James Davison got unbalanced through the first corner and collided spectacularly with fellow second-row starter Andre Castro (Legacy Autosport).

Further chaos occurred behind, with 10 cars being taken immediately out of contention.

This led to a full course yellow that ran through laps two and three, and enabled drivers with only minor car damage to pit.

Eves had to hold off Esterson through the first few braking zones on the restart, but after that looked comfortable in the lead and the top two pulled away by 15 seconds from the rest of the field in the 13-lap race.

On the restart lap, Max Kaeser passed Jay Howard Driver Development’s Keawn Tandon for third place and then kept the karter in his mirrors to round out the podium.

DEForce Racing’s Elysiah Navarro and Juncos Racing’s Nate Aranda were fifth and sixth, while Mac Clark finished behind that pair after going down an escape road. Bryson Morris and Hayden Bradley were the last two drivers on the lead lap, with HMD Motorsports’ Timmy Pagliuso taking reversed grid pole for race two in a lapped 10th.

Toby Sowery pitted twice, not returning to track on the second occassion, and the Juncos driver was a twice-lapped 11th. Global Racing Group’s Benjamin Pedersen had been in contention for a top 10 finish before crashing out mid-race.

Race two began with a lap behind the pace car, with Clark charging into the lead as the field went through the first corner of green flag action. Once again the Canadian’s hopes of a strong result were undone by missing a braking zone and going down an escape road, and it dropped him to fifth after several laps out front.

Tandon inherited the lead, but had Esterson tracking him down and the F1600 racer made his move on lap nine of 14.

From there he edged away, as Sowery passed Morris and then Tandon to finish second. Turn 3 Motorsport’s Josh Green and Legacy’s Simon Sikes demoted Morris to sixth, while Eves’ race started with a lap one crash and off before getting involved in another incident later in the race.