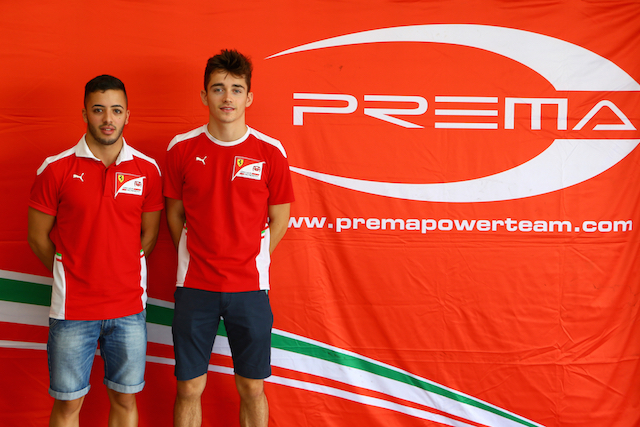 Ferrari proteges?Charles Leclerc and?Antonio Fuoco?will form the Prema GP2 line-up next season, as both step up from GP3.

Leclerc, 19, clinched the GP3 title in Abu Dhabi last weekend with 20-year-old Fuoco finishing third in the standings, having remained in title contention going?into the final round.

Prema dominated GP2 in its first season in 2016, with Pierre Gasly beating team-mate Antonio Giovinazzi to the title in Abu Dhabi.

Managed by Nicolas Todt since karting, Leclerc joined the Ferrari Driver Academy last winter after a strong rookie season in Formula 3, his second year in single-seaters, and this year has made Formula 1 free practice outings with Haas.

?I can?t wait to start preparations for this new and exciting challenge,” said Leclerc.

“After having completed my GP3 experience in the best possible way, I will continue to give my 100 percent to keep bringing home positive results. I am sure that the support of the reigning champion team, which also finished 1-2 in the 2016 driver standings, will prove crucial.?

Fuoco will be returning to Prema, with which he won the Formula Renault Alps series as a car racing newcomer in 2013 and then won races in European F3, prior to a two-year stint in GP3 with Carlin and Trident.

?Entering the GP2 Series in 2017 will be particularly exciting, and doing it with an Italian team which is also the reigning champion will provide some additional motivations for me to do well,” said Fuoco.

“I already raced with Prema in the past and I am aware of the high performance level of their cars, as confirmed by the outstanding results they got this season.”

The deal for Leclerc and Fuoco rekindles a long-standing relationship between the Ferrari Driver Academy and Prema, which dates back to 2011 but which cooled when Lance Stroll left for Williams 12 months ago and took academy chief Luca Baldisseri with him. None of the Prancing Horse’s youngsters were placed with the team this season.

Having raced for Prema in Italian Formula 4 in 2015 but made the move to F3 with?Motopark this season, Chinese FDA member?Guan Yu Zhou is expected to return to Rene Rosin’s team for next year.

?We are happy and proud for the trust that the Ferrari Driver Academy has given to our team,” said Rosin.

“Being able to collaborate with two extremely talented youngsters like Charles and Antonio is highly motivating for the team, and we will provide them with our best support, aiming for more outstanding achievements.

“The GP2 Series is renowned for being a tough fit for rookies, but we are convinced that Antonio and Charles have all what it takes to emerge in the short term.?

The pair’s GP3 rival Alex Albon is expected to step up to GP2 with ART, joining Honda junior Nobuharu Matsushita.

Another top GP2 team with little doubts over its 2017 line-up is Racing Engineering, which has revealed that?Gustav Malja and?Louis Deletraz will drive for the team on all three days of this week’s post-season test.

Rowland to DAMS, Giovinazzi to Arden in GP2 test