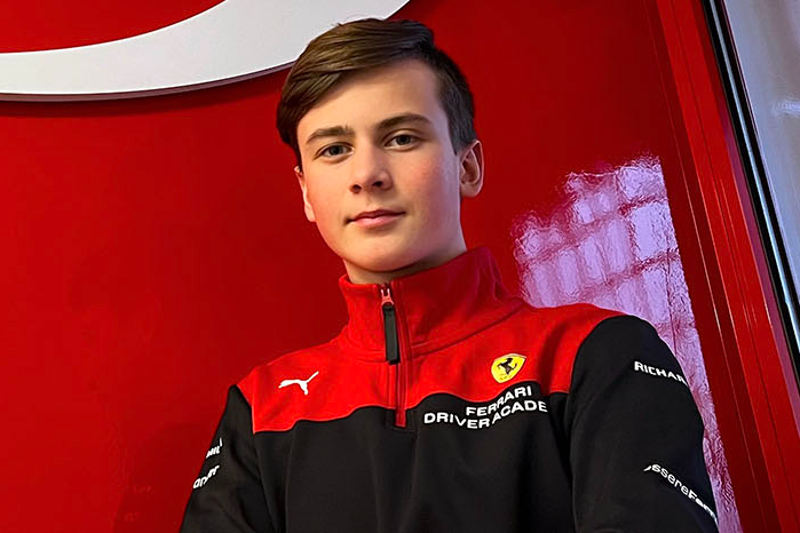 The first representative laptime was set by Sainteloc Racing’s Theophile Nael in the hour-long morning session, and he improved twice to 2m06.982s before MP Motorsport’s Valerio Rinicella then bettered him by a third of a second.

Rinicella was able to stay on top for almost 19 minutes as he went faster four times until he got to 2m04.464s.

With 22 minutes to go he was knocked off top spot by Hitech GP’s Will Macintyre, whose penultimate lap – a 2m03.701s – put him three quarters of a second clear.

Rinicella was shuffled down to third by Mumbai Falcons’ James Wharton on his last lap, and was 0.413s off Macintyre.

Prema’s Ugo Ugochukwu was the only other driver within a second of Macintyre, 0.003s slower than Rinicella, although R-ace GP driver Jesse Carrasquedo in fifth actually had the fastest second-best laptime and along with Rinicella was one of only two who were twice able to lap sub-2m04.8s. Macintyre’s second-best effort was only a 2m05.616s.

The second session started at 11:20am and ran into the afternoon, and Nael was first to lap. He was on top for seven seconds before Yas Heat Academy’s Keanu Al Azhari crossed the line and broke into the 2m05s. His next lap was an improvement of almost two thirds of a second, but it did not keep him ahead long as Mumbai Falcons’ Taponen got into the 2m04s.

Wharton moved ahead by almost half a second a minute after Taponen’s lap, but the latter responded with a faster 2m04.283s. However Wharton’s next lap was the session’s first sub-2m04s effort.

Taponen improved three times in the next 10 minutes, then Wharton returned to the top by a tiny margin after getting his tyres back into the window following two cool-down laps.

Nael edged agead by 0.040s in the final 10 minutes, but he would not end up on top, as a minute later Carrasquedo knocked almost a second off the benchmark and became the first to lap sub-2m03s with a 2m02.579s.

That went unbeaten through the session’s second half, and R-ace team-mate Zachary David got closest as he set a 2m03.149s. Taponen demoted Nael to fourth, ahead of Wharton, R-ace’s Alexander Abkhazava and Macintyre.

PHM’s Noah Stromsted and Xcel Motorsport’s Noah Lisle did not improve on their morning session times.

Nael was again first to lap at pace in session three, and 12 minutes in Kluss moved ahead, soon lapping in the 2m03s.

Brando Badoer, co-run by Pinnacle Motorsport and Van Amersfoort Racing, was next to the top and stayed there until Yas Heat’s Hamda Al Qubaisi set a 2m06.644s after half an hour. Macintyre quickly shuffled her off top spot by 0.622s.

There was a a flurry of improvements 43 minutes in, with 13 of the top 15 posting personal bests and Taponen setting the test’s fastest lap: a 2m02.572s.

His next lap was a 2m02.173s, which would put him 0.403s clear of Wharton. Prema’s Niko Lacorte rose to third with six minutes remaining, although fourth overall due to Carrasquedo’s session two benchmark.

Despite being signed to Xcel Motorsport, Fernando Barrichello was driving for Carlin alongside Dion Gowda. The team has not announced any drivers for the upcoming season.