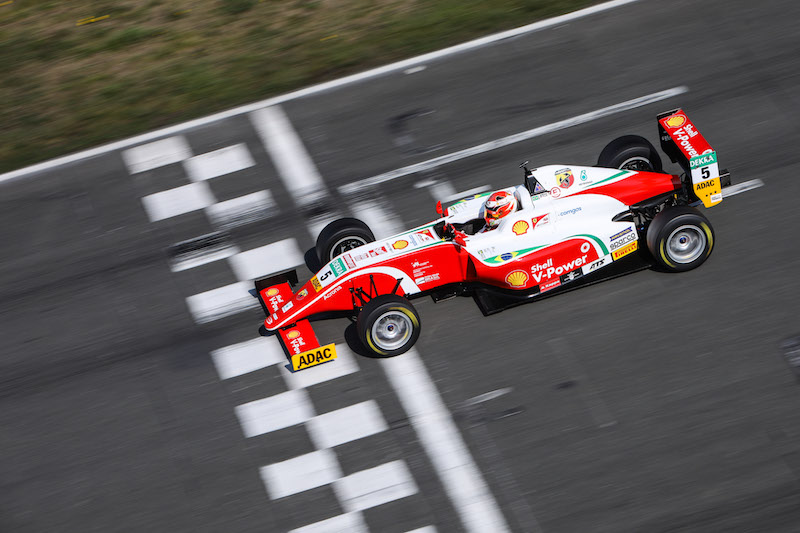 Gianluca Petecof dominated the opening race of the ADAC Formula 4 season as he claimed a lights-to-flag victory at Oschersleben for Prema.

The 16-year-old Brazilian led away from pole position at the start and pulled away from the rest to win by 14 seconds from Roman Stanek.

Czech karting graduate Stanek lost second place at the start to the fast-starting Niklas Krutten, who made up three places from the third row of the grid.

Krutten came under increasing pressure from behind during the race and, after locking up and running wide at turn two, Stanek was able to go past to finish in second place for the Sauber-branded US Racing team.

Van Amersfoort Racing’s Krutten was passed by teammate Dennis Hauger in the closing stages, the Red Bull junior making a great comeback drive from 11th on the grid having suffered a ten-place grid penalty for practice infringements.

Theo Pourchaire finished in fifth place for US Racing, with Paul Aron in sixth ahead of Prema teammate Alessandro Famularo, the pair both overtaking Ido Cohen late in the race.

Alessandro Ghiretti finished down in tenth, despite running as high as sixth early on, ahead of Lucas Alleco Roy and Arthur Leclerc – the two Monaco-based drivers touching early in the race, which caused Alleco Roy to go off the track.

Oliver Rasmussen retired from the race early on after damaging his car as a result of running into Prema teammate Aron whilst contesting eighth place.