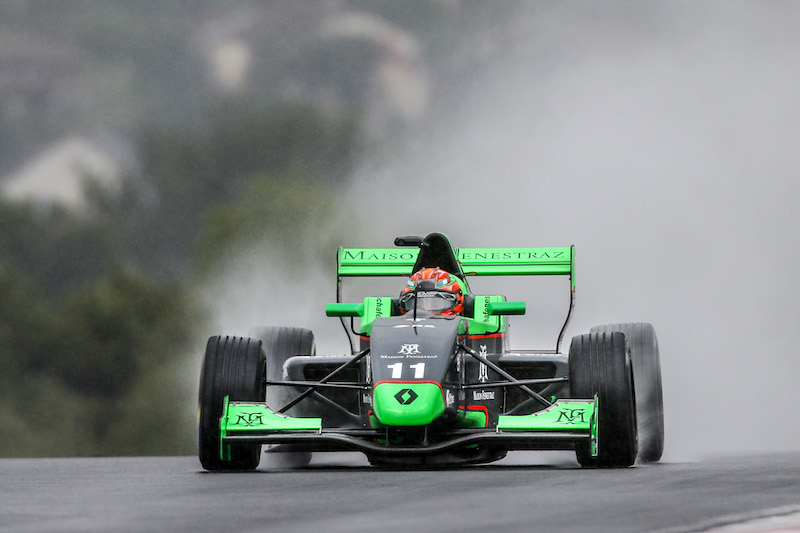 Sacha Fenestraz took his second Formula Renault Eurocup win of the season in wet conditions at the Nurburgring to close on the lead of the championship.

The Franco-Argentine managed a late safety car restart to build a gap of nearly four seconds to second position.

The race went green with 16 minutes on the clock after a safety car start. Battles immediately began further down the pack but Fenestraz was able to stay clear of Dan Ticktum in second.

The slippery track led to many drivers spinning off at the first corner, some collecting other cars when they lost control. Multiple cars at the back of the pack found themselves stuck on track, bringing out the safety car once again.

Higher up the order, Max Defourny was also pushed off at the corner. The R-ace GP driver had been running fifth but dropped down the order as the safety car rounded up the field.

Ticktum closed in on Fenestraz under the safety car and, on the restart, the race leader couldn?t shake him.

The rookie attempted a brave move up the inside at turn one, but ran wide and stayed second. After the overtake attempt, he fell away from Fenestraz and the race leader sped off into the distance to finish 3.915s ahead.

Behind them, Yifei Ye and Robert Shwartzman were battling for third. Shwartzman was able to find a way past to take the final podium position but, on the final lap of the race, ran wide at turn one, finishing the race eighth.

Ye took third, ahead of a four-way fight for fourth. Gabriel Aubry finished less than a second ahead of Will Palmer. Defourny took sixth, just 0.315s ahead of Max Fewtrell.

On the edge of the points, Zane Goddard held off a strong attack from Axel Matus to take 11th. Matus had been defending from Thomas Neubauer and Raul Guzman earlier in the race, but contact between the two forced Neubaur off. Guzman later fell away from Matus after running up the escape road at the chicane.

Despite his late error Shwartzman remains in the championship lead but only six points ahead of Fenestraz and 10 ahead of Palmer.