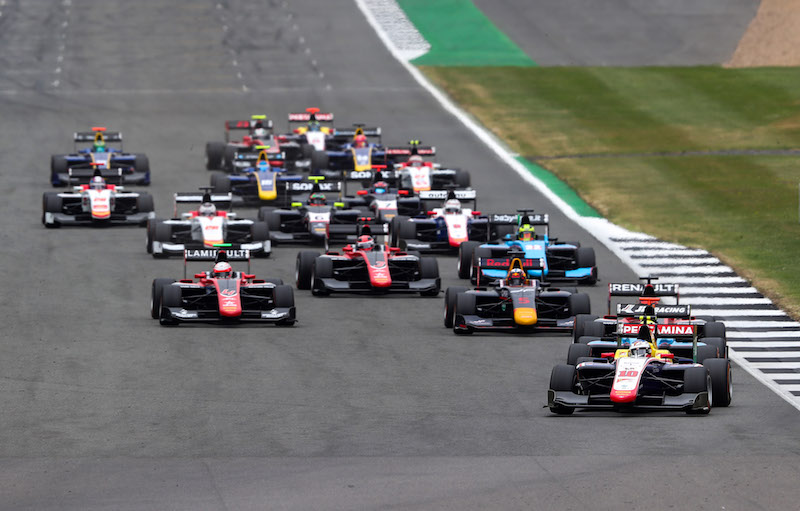 Alesi thought he had reversed-grid pole for the race when he took the flag in eighth place in Saturday’s opener, only for his Trident team-mate Dorian Boccolacci to receive a penalty for late contact with Kari that put him into eighth place.

Boccolacci however failed to make it out of the support race pit-lane in time to make the start of the race, giving Alesi the chance to take the lead when he made a good getaway from the grid.

Aitken meanwhile moved up past Kari off the line and then dived down the inside of Arjun Maini on the inside of the Village right-hander to claim second.

He then cut the gap to Alesi to just half a second at the end of lap two, but the Frenchman managed to respond prior to a lap-four safety car after contact between Julien Falchero and Steijn Schothorst sent both cars into the Abbey gravel trap.

Alesi posted consecutive fastest laps after the restart and built a 1.2-second advantage as Aitken dealt with pressure from Kari, who took third from Maini into Vale on lap three.

The lead gap came back down over the last five laps of the 15-lap race, with Alesi only 0.3s ahead with two to go, but he again responded and won by 0.7s.

Race one winner Russell cleared Maini into Stowe on lap nine and rapidly cut a 2.4s deficit to Kari ahead, but ultimately couldn’t deny the Finnish Red Bull Junior his first podium.

Maini led Jenzer team-mate Alessio Lorandi in fifth, the Italian making contact with Anthoine Hubert when he passed the ART driver at the Loop with five laps to go.

Hubert was knocked wide, causing him to finish behind Kevin Jorg in eighth, but the stewards chose not to take any action on the contact.

After a problem with the gears forced Nirei Fukuzumi to retire from the first race, he finished 16th and last in race two with a 10-second penalty for overtaking Bruno Baptista for 14th under the safety car.