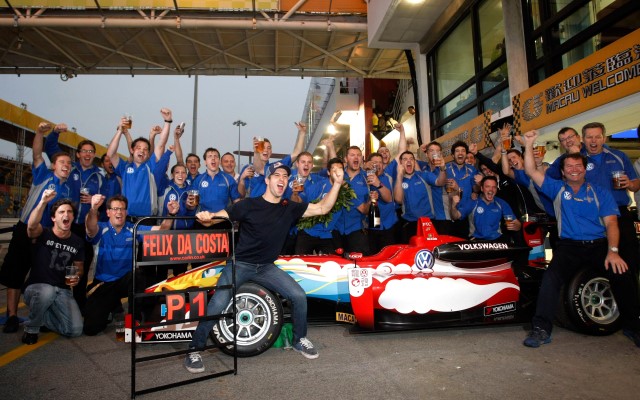 Felix da Costa missed out on a promotion to a 2014 Toro Rosso F1 seat earlier this week to fellow Red Bull Junior Kvyat.

Kvyat was a race winner in the FIA F3 European Championship this year for Carlin but will now miss out on the chance to make his Macau debut while he attends the United States Grand Prix on the weekend of 16-17 November.

Felix da Costa won last year’s Macau event driving for Carlin, and will now bid to join Edoardo Mortara as a two-time winner of the race. Just as last year, he will contest the MSV F3 Cup round at Snetterton this weekend in order to qualify for Macau.

There he will join fellow Carlin driver Carlos Sainz as well as Formula Renault 2.0 graduate Esteban Ocon, who is lined up to drive for Prema at Macau.

?I am really happy to be racing in Macau again, particularly with Carlin after our success there last year,? said Felix da Costa.? ?Obviously the aim is to win again, although in Macau you can see your weekend turned around in an instant. But when the opportunity came up to race there again this year, I couldn?t say no.?

Trevor Carlin added: “We are delighted that we have one more chance to race with Antonio.? He was superb in Macau last year and as a real racer, he jumped at the chance to return this year when the opportunity arose.

“As we always say there are so many factors involved in a race win in Macau and talent and speed isn?t always enough; on such a tight street circuit you need an element of luck as well so there?s no pressure on Antonio to dominate again.? Having said that, he is a massive asset to the team and his experience will be invaluable to our rookies and we head to Macau a much stronger team for having him with us.”